That somehow could we still share :: time :: all the while with Efes passing
through 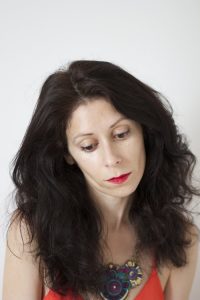 Recipient of fellowships from the New

York Foundation for the Arts and Canto-
Mundo, Rosebud Ben-Oni’s most recent

was selected as Agape Editions’ EDI-
TORS’ CHOICE (2019). She writes for The

Kenyon Review blog. Her work appears
in Poetry, APR, The Poetry Review (UK),
Tin House, Guernica, among others; her
poem, “Poet Wrestling with Angels in the
Dark,” was commissioned by the National
September 11 Memorial & Museum in

NYC and published by The Kenyon Review
Online. Find her at 7TrainLove.org

Rosebud Ben-Oni
What Lurks in the Shadows:
In Conversation with Ann Dávila Cardinal...