Blog - Latest News
You are here: Home / Creative Nonfiction / Espionage Is a Risk

Each tread of the staircase in our rented apartment measures roughly nine inches. The risers are eight inches high. Builders use various formulae (e.g. height plus depth equals seventeen) to fix the tread/riser ratio. I use a formula—the word “recipe” seems overgenerous—to prepare the protein shake I carry upstairs, five times a day, to my twelve-year old son. Blend one liter of soymilk and three scoops of protein powder. Add strawberries for flavor. Split the mixture between five lidded cups. But don’t write the formula down, the clinic’s nutritionist has warned me. Espionage is, apparently, a risk.

The tread in many staircases is insufficiently deep for the length of the foot. This is the case for me in this apartment. My heel cantilevers off the step, and I rely on the muscles of my forefoot for traction. This overly long foot is due, in part, to a great toe of excessive proportions. Riche has inherited the Webster toe gene—the name a nod to my father’s side of the family. Other genes I have gifted him include those for oversized blue eyes, a head for figures, long femurs, unremarkable cheekbones, and a predisposition to obsessive-compulsive disorder, depression, and eating disorders.

I count the steps on my way up: “One, two, three…” I count slowly to match the pace of my feet. I’m in no hurry to reach the top. Riche, on the other hand, is prone to run up the stairs. The purpose for such haste is twofold: to outrun any mobile calories in the kitchen and to maximize energy consumption. Anorexia, like a parasite, has invaded my son’s brain and controls his thoughts. It knows how to make every step a winner.

“Four.” I’m level, now, with the peepholes in the staircase wall. These holes give Riche direct line-of-sight to the kitchen. In this way, he can see if I’ve brought forbidden fruit into the house (Oh Eve, thou art deceitful). He can also check my compliance with the Protein Shake Preparation Ordinance. The steps are clearly stated: Wash hands. Scrub bench. Wash hands. Open refrigerator door and remove soymilk and strawberries. (Door must be swung wide so that soymilk carton avoids contact with contaminated rubber strip on door edge.) Wash hands. Remove protein powder and blender from cupboard. Wash hands. Measure and blend ingredients. Wash hands. Serve. Wash hands. These steps are necessary to prevent additional calories on hands or objects from insinuating themselves into the protein shakes. I check the peepholes before I begin shake preparation, but like the traffic police with their breathalysers, Riche’s anorexia knows the value of random checks, so at all times, I follow regulations.

“Five, six, seven.” My bare feet make shushing sounds on the beige carpet. Small synthetic nubs scratch my skin. At this level, featureless white walls enclose me on either side. The seventh step bears the first of the stains—protein shake—which arc in a gentle curve to the landing. A cornered eating disorder’s Jackson Pollack style solution to supervised refeeding: splatter rather than swallow the killer calories.

“Eight, nine…” I’m losing my concentration. What does it matter how many steps there are? Sooner or later, I will reach the top. Which I do. And there I confront the Shake Routine. This involves questions from the whining parasite in Riche’s head—Did you wash your hands?—with appropriate answers from me. In this instance, appropriate and honest do not always equate: No the soymilk did not get near other food in the supermarket.

I can’t tell you the total number of steps: I never did count them all. I can tell you that I went down at a more varied pace. If I had just given Riche the last protein shake of the day, I took the steps at a moderate clip. If Riche had allowed the milky fluid to pool in the sides of his cheeks so he could later spit it out, if he had spat and coughed repeatedly while he cleaned his teeth so that I feared he would vomit, then I trudged slowly down the stairs. Occasionally, to escape the parasite’s voice, I took the steps too fast and tripped. But this was a good day. The parasite seemed quieter: a single run through the questions sufficed and spitting and coughing were easy to control. On my way down, I held the empty cup in my hand like a trophy and took the steps two at a time. 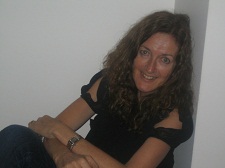 Amanda Skelton is a medical doctor who lives in Sydney, Australia. Her work is forthcoming in Alimentum and in an anthology of work from The Healing Art of Writing: A Conference and Workshop to be published by the University of California Press. She was a general contributor at the Bread Loaf Writers’ Conference in 2010 and is at work on a book-length memoir titled Sex & Marriage.

The Kneebone Boy: Excerpts from a Novel