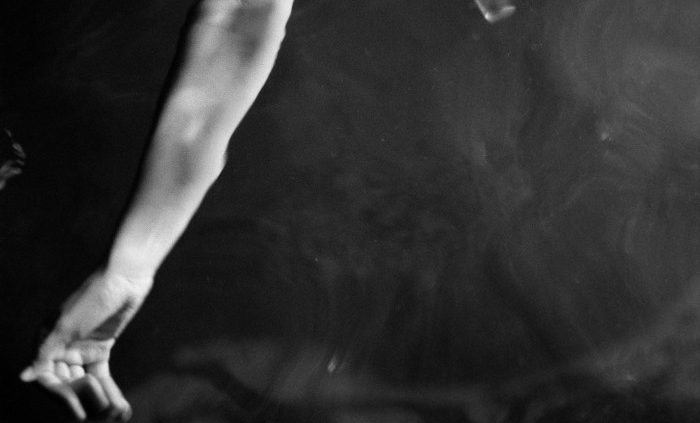 I Am Reborn as a Shadow

down to the water’s under-black

when I step out

a dark
cast on the water-shine.

Under the skin, that’s where I am afraid—
I found it in the mirror tonight
between my breasts and just below
where halves of the ribcage meet,
down an alley, under a lightless
window, that’s where I am afraid,
past the dumpster inside of which someone
in a sleeping bag full of holes
is not asleep, that’s near where I am
afraid—little ship under the skin
has been there all along. Fear of not
being able to breathe. Of alone.
Fear in me is round and swollen,
hurts at a finger-touch.
Hard light inside of me I can see
when I suck in a breath, above the only
curve of ribs on either side. Spiders.
Break-ins. Losing my life. Losing my job.
Little process of proceeding towards
an end. As if, whereas, what if. Walking
places there are more than
twos and threes, of trees, of faces, rooms
full of faces, more than three. What every
number was, how high the upper story
of a parking garage where it is always
night. Oh fear in my chest,
light at the tip of a word now dull
from common use, state of submitting to,
state of being submitted, you little process,
fear that is not my heart,
fear that is not my bone,
ship on its way to becoming some
fictional tumor or star, light of a little golf ball
filled with rubber bands, light of the falling
leaves, of this lapse in time.

A Numbered Sequence: To the Figures of Horses in the Cave of Chaudet-Pont-d’Arc, After Seeing Werner Herzog’s Documentary Cave of Forgotten Dreams

1)  Would you have dreamed your way so sweetly into this life beneath a flashlight’s shine?  Or spotlit by a movie crew, the grandiloquent voice of Werner Herzog musing over the brush held in a human hand 30 or 33 thousand years ago?  So, do you think the findings in this cave show the birth of the human soul?

2)  Your mouths are open.  One of you seems to be nickering.  Not hungry, or surprised. Your eyes are softly closed, though your heads are all turned in the same direction like real horses looking at something or someone coming towards you.

3)  In the news today an Iraqi man in a hospital bed lifts his bandaged hands like a pair of gloves.  He doesn’t seem to care if he wears them or takes them off.  Probably that will change, when the pain comes flooding back.

4)  Instead of numbers, maybe you would have liked asterisks (little stars).

Such space it comes again to be,
a room of such vast possibility,
a depth so great, a way so free.

6)  All our telescope sightings, crucial to navigation, had to be made in the dark . . . .

7)  I want to say something weighty and metaphorical, such as this: “So much darkness in the human hand.”  Your eyes are closed.

8)  A lot of poetry seems to me very good in the tradition but just doesn’t move me very much because it doesn’t have personal vibrance to it.  When torchlight flickered on the wall, you horses must have seemed to be waking up.

9)  If a bomb went off and you came alive, you would turn your heads, you couldn’t help it, you would shy away.  Maybe sleep would be ever skittish after that.  Or maybe you’d let sleep guide you gently back 30 or 33 thousand years, back inside that hand.  Are there numbers that don’t divide us then? 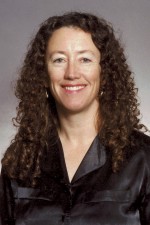 Dr. Nancy Eimers is a professor in the Department of English at Western Michigan University. She is the author of four poetry collections: OZ (Carnegie Mellon, 2011), A GRAMMAR TO WAKING (Carnegie Mellon, 2006), NO MOON (Purdue University Press, 1997), and DESTROYING ANGEL (Wesleyan University Press, 1991). She has been the recipient of a Nation “Discovery” Award, a Whiting Writers Award,  a National Endowment for the Arts Fellowship and a Pushcart Prize.