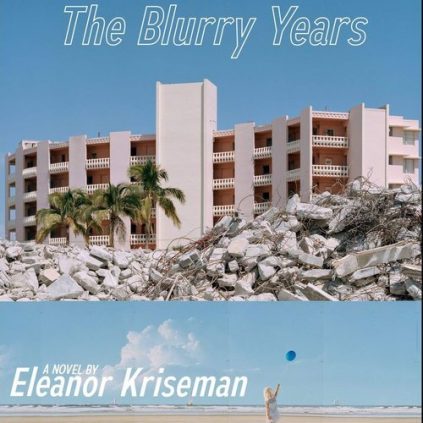 Callie, our narrator, has a keen eye for observation and takes us into her childhood in a tourist-rich yet sleazy Florida, set vividly in the late-seventies and onwards. We begin with her as a six-year-old and end with her leaving on her own at eighteen. Her mother is a forgetful and irresponsible drunk, one who drags her young daughter from apartment to trailers to cars and homes with friends, all in an attempt to leave her own mistakes (and usually her choice of men) behind. This short novel is a coming-of-age story of a lonely child, trying to make sense of the world in ever-changing circumstances.

Kriseman captures the young Callie’s perspective and adolescent musings well, showing the compelling dynamic between mother and daughter through brief exchanges. For example, after moving her daughter once again into a stranger’s home, her mother sits on the bed one evening.

‘She climbed under the covers with me and hugged me close. “We’ve got each other, Cal,” she said. She traced my hairline with her finger. “I’ll never disappear like your grandma.”’

When Callie talks about listening to a couple of friends that they were staying with, I remembered that feeling myself, of not quite catching what was being said, even though I understood the words my mum and aunt were speaking. Callie describes that confusion, “like there was another layer to the conversation I couldn’t yet unlock, something that would come–when? When I was a little older? I wanted to know it now.”

And so it goes in The Blurry Years, constantly moving, full of confusions,  miscommunications, and ever hopeful expectations as we follow Callie for most of her childhood. She has to learn about puberty on her own and with friends, equally as lost. One day, a friend in the neighborhood asks, “Does this ever happen to you?” and Cal’s response was that “I wanted to cry with relief. Nobody had taught us anything about becoming women. We were figuring out on our own.”

She struggles with knowing how to relate to men and women. As Cal becomes a young woman, out on her own, she finds herself second-guessing interactions with others who seem interested in her. One day while waiting at an airport, she strikes up a conversation with the woman next to her.  “Barbara was flirting with me, I was pretty sure. It was an unsettling feeling. Foreign, but strangely familiar. And even more strange to find myself flirting back. Was I doing it out of habit, on autopilot? I was so out of touch that I didn’t even know the answer.”

The Blurry Years is a well-drawn story of growing up alone with a mother who is absent emotionally yet present physically. Callie is a vivid likeable child who we can’t help but root for as she struggles to understand the grown-up world she’s stuck in. I could empathize fully with her and wanted time to speed up so that she could head out into the world on her own terms and with a strong sense of self. She does. Thankfully. Hopefully.