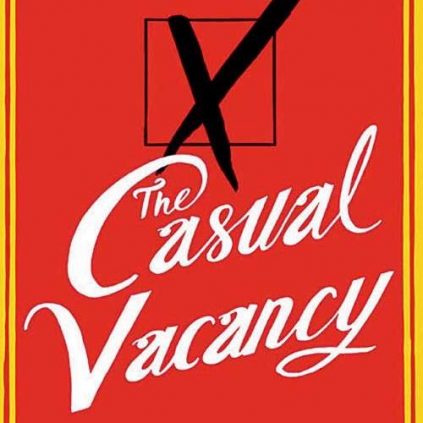 A book Review in Letters:

Sarah Seltzer and Sarah Braud on The Casual Vacancy by J.K. Rowling

I wish we were sending this by Owl instead of email. Oh, well, let’s be prosaic and leave wizardry behind.

A nickname for this new novel, which involves a contested seat for the town of Pagford’s Parish Council after a beloved local figure dies, is “Mugglemarch.” That is an enticement to me, since I’m one of those nerds who has read “Middlemarch” multiple times. So when the initial bad reviews came in, I was indignant. Snobs! I said.

But it took me days (and days) to read the first half, and I began to suspect the reviews had a point. Everyone in Pagford just schemed and moaned about each other. Then things picked up: I spent only a few hours reading the rest, as those complaints took the form of unexpected action—with dire consequences. In some ways, the pacing was not unlike a Harry Potter book with the chess pieces being put in place painstakingly and then poof! moved very rapidly. This formula works for fantasy novels, less so for the tough-minded realism she’s going for here.

How goes your reading? Did you get to the dirty parts yet?

The problem is crowd control. For a small town, we sure meet a lot of people in the first few chapters. I can’t keep them straight. I keep having to stop and reread for clarity. Do I know this character already? What side of the aisle is she on? That said, I am enjoying her characters’ inner lives immensely. Everyone seems ridiculously British and tragically flawed.

Samantha sometimes found Miles absurd and, increasingly, dull. Every now and then, though, she enjoyed his pomposity in precisely the same spirit as she liked, on formal occasions, to wear a hat.

or  (okay, if this is the dirty part, you tricked me):

He took a long time to climax, his horror at what he had started constantly threatening to deflate his erection. Even this worked against him: she seemed to take his unusual stamina as a display of virtuosity.

Rowling handled the multitudes in the HP books fairly deftly, though she did have seven books to do it in.

I haven’t decided if the political back-and-forth is supposed to be a metaphor for the Palestinian Peace Process or the US election. What do you think about the politics in this book? Is the struggle between the two elements in the Parish council over whether to finance a nearby housing project and methadone clinic a simple bleeding hearts versus blue-bloods story?

Please tell me there is redemption in this story, or I just spent all day making a family tree of Pagford for nothing.

I thought the politics of the novel were a little too pat, yes…
–The Fields (the name of the housing project) vs. Old Pagford.
–Team “help the poor” vs. team “fuck the poor.”

But as a sort of playing field for her characters, the political struggle worked. The aspect of the novel that engaged my imagination most was its bitter and vicious send-up of the way people talk about politics, their petty selfishness.

My friend Lauren recently wrote a piece about a group of wealthy people up in arms about a pay-what-you-can Panera Bread franchise in their neighborhood; they don’t want the poor clientele coming around. The “not in my backyard” behavior of the snobs of Pagford may seem absurd, but it’s all too real.

As for the question of redemption, I don’t think a novel needs it, and I loved the dark ending of The Hunger Games. (Perhaps that’s the atheist Jew in me?) But I also don’t like tragic endings that exist merely for the sake of being tragic—they have to be a satisfying and logical conclusion to the characters’ flaws and actions. I believe the profile of Rowling in The New Yorker called this particular ending Hardy-esque. That alone convinced my husband not to read this novel, and I’m not sure I blamed him.

I do adore the idea of Rowling writing in this fabulous British tradition of painting the portrait of a community à la George Eliot or Elizabeth Gaskell. But this was a mixed attempt. I’d really like to see Jo Rowling try again: another grown-up novel that feels lighter, fleeter, funnier, even if that fleetness is in service of affirming an authorial vision that is dark overall. I respect darkness. Just not plodding darkness.

How much better would The Casual Vacancy have been if Rowling had an aggressive editor?

What would have happened if she’d had a more aggressive editor? Great question! I had the feeling throughout that she’d sent a chapter at a time for approval, each one to a different editor.

The families of Pagford were vividly rendered, even if some were caricatures. Think Harry Potter’s Dudley Dursley. No one in The Casual Vacancy was as evil as Dolores Umbridge. Certainly a few Cornelius Fudges live in Pagford. I’m utterly enamored with several of her characters. Krystal Weedon, the wayward daughter of a heroin addict who ends up the heroine of the novel, will stay with me for quite awhile.

Rowling’s introduction to these wonderful characters roared to life, sputtered, and stalled out for 300 pages. Did I mention I had to make a family tree just to keep all the characters, including nicknames, straight? But—and it’s a big but—by page 400, the story climaxed into a spectacular crash.

The conclusion held all the weight of the novel. I was slayed. I bawled my way through the last few chapters. What I thought was a formulaic story about politics ended up, for me, being a polemic against politics, or at least the motives behind politics: Whatever side you take, what matters is being a good neighbor. The Christian reader inside me was satisfied: The redemption came in the form of the overall theme. The Casual Vacancy is a modern-day story of the Good Samaritan. And, in our case, I am forced to ask: Who is our neighbor?

Overall, however, I do think we agree, Sarah. The Casual Vacancy might be something of a misstep for JK Rowling…

… but we don’t want her to give up on writing for grown-up muggles. I know we’ll both be keeping the faith ‘til the next installment of her prose. James Baldwin, Flannery O’Connor, and the Ethics of Anguish