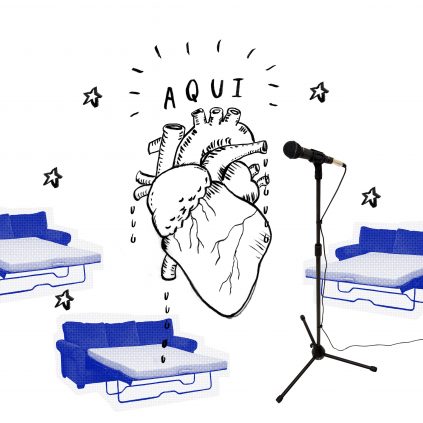 How to Make Art

Even when I’m sick, when I feel
the thorn of a sore throat
prick my right tonsil, and I purr
through a stuffed nose
while I dream of spilling my coffee
because I’m stumbling
through the house without opening
my eyes because I can’t open
my eyes because I’m still dreaming
and I’m late for work, I hear
the robin’s circular whistle
at the window. Winter is always long.
But the robin is back. Even
when the weather won’t stand still,
when it throws my body
into viral confusion with snowstorms,
hailstorms, and sixty-degree winds
all in one week, the robin is building her nest.
The robin has work to do. She is singing.

“As a man’s knowledge grows, and his power increases, the road he takes grows ever
narrower, until at last he does only and wholly what he must.” —Ursula K. Le Guin

Bicep, bone, bloodstream, esophagus,
coughing fits, apologies, laughter
in the vocal cords and a current of air—
a lamp sits on the table.

Plug it into the wall. Flip it on. Unplug it.
Reconnect. Be careful. You don’t see
the current moving, but you know
it’s there—a circuit.

You see a wire. A glimmer of light.
A backlit lampshade. A shadow.

A friend once gave a shadow-puppet show
in his living room, the paper cutouts
scissor-snip-precise and delicate, intricacies
intended to channel the light exactly
where he wanted it to shine:

eye socket, patterned shirt, in-between
strands of hair. Highlights in the dark.
Sometimes we are backlit.

Take a heart as example, or shock-pads
and monitors, or just the sound of a voice.

You don’t see the current moving,
but you know it’s there—a connection
to tend, to harness, to extend outward.

You see the body you were given, its intricacies
intended to channel the light exactly. You must.
Though you’ll cast a shadow.

Ballerinas were particularly vulnerable, the tarlatan
and gauze. But all girls could light like chimney fires—

the bells of their hollow hoop skirts funneling air
up the legs. In the days of fireplaces and gas

The fabrics were spiderwebs and angels’ gowns.
The women—dried-out Christmas trees, needles

dropping. Before household electricity,
but mass-produced fabric meant every girl

could leap like Emma Livry. See them
at their mirrors, pretending, making

Ballerina skirts were longer then, and light—
made to look like seraphs. Everything was white

or lavender or buttercup and paid for by old male patrons
championing his girl to the top of a playbill. Once,

a whole row lit in formation. The one on the end—too close
to the lamp. The others—too close to the girl beside her.

The same dance when one sister rushed to the fireplace
to put the other out. The trouble with hoop skirts
was that women could move their legs.
They burned down brownstones,

She was waiting for a casting call, stressed, sneaking
a cigarette—had just gotten the tobacco lit when he approached.

She’d insisted on warming the house with her husband
gone to work and the children away.

She needed the candle to find her bedchambers,
brought it right into the room. It cast light
on her smile, her bodice, her undone button.

She was facing the wall, about to breathe in—turned
and tucked the flame quickly behind her back
so he wouldn’t see. You could almost hear the suck of air
pulling inside and up.

She brought the candle to her own bedside,

had the audacity to dance

was trying to help her sister. 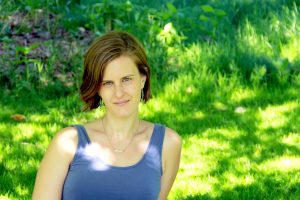 Lizzy Fox
Queering of a Peculiar Institution:
A Review of The Water Dancer...

Where Did You Go?