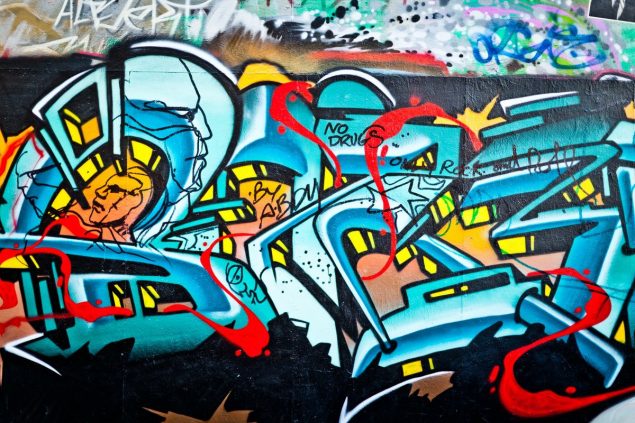 Tío, the desert is a skin too.          It peels off
just like anything else.          I’d like to think you loved
nopales—that you went to market, picked up a few
in a plastic bag, sliced them, ate them like that, in between
your fingers. When I was young my family used to drive
to Rocazul for family gatherings at an old house—
red tile cracked, white walls water stained, bricks
worn down, scorpions everywhere, and black worms
bloated and disgusting with things that looked like thorns
coming out their bodies that made your skin burn
if you touched them, gusanos quemadores, and a small garden
where the light had trouble getting in through the heads
of the trees. At the center there was a statue
of San Juan Bosco, some saint who was poor and performed
tricks on the street for money.             Every year, the skin
of the statue grew worse, green with moss, water
marks, the edges of the stone robes defaced, and
the face smoother, lighter, the nose, the hair, the smile,
his two hands reaching out to you,
to nowhere. You said
you liked it at the detention facility, that they fed
you at least.            When your brother tried
to help you, take you off the streets, you threw a rock
at his window and broke
the glass. The police came for you. And now they won’t tell us when you’ll be
deported, or where, they’ll just leave
a note of your absence online, but my father doesn’t have the heart
to look. And even now I know so little
of you—vague mentions of drugs, mental
disorders, your parents abandoning you, the crossing
when you were young, a hand hitting you
on the face, a mouth screaming at you.
You worked
rolling carpets in Arizona, lugging them into people’s cars. You
gave me my first cerveza one day we were watching
football and my father stepped out and you handed it to me
and said córrele chingatela rápido, and you liked birds,
especially a cockatoo you named Chupe, and staring
at the desert at daybreak, and one time we saw
a road runner and you lectured me about my tattoos,
said the skin is a desert and the things we bury
in it become a road of cobbled stones
we have to walk. Michelle is leaving
for work soon, overnight shift at Denny’s. Once, Michelle’s mother
hit her on the face with a big wooden spoon, called her
a fat useless piece of shit, said she was going back
to Mexico and leaving her all alone. And when Michelle found out her father
wasn’t her real father, and she asked him if that’s why he treated her
differently than her siblings, why he treated her like a maid, yelled at her, made
sure she couldn’t go to college, he said, yes, and asked
for forgiveness.
Sometimes I don’t know how
to love someone.             But what
if I said I think you’re wrong? What if I said the things
we bury in our skin make cathedrals out of us?
Tío, if they drop you off
on a cobbled road, put down your hand and feel the warmth of the
sun on the stones.
The desert is a skin too, tío
I’d like to think you loved

If the factory is a kind
of cathedral, this is how you pray—
your calloused hands at the assembling
line counting plastic nails, counting little
plastic spheres, red, purple, dark green,
counting filters, irrigation hoses, stakes,
bullets, counting long metal pieces, narrow,
hollow, your calloused hands
at the gluing table making
filters, gluing pvc pipes to couplings,
getting dizzy because of the fumes, shivering
because it’s freezing inside
the factory and your fingers are numb
but you still need to take off your gloves to handle the small
pieces, standing by the turkey deep
fryers the workers call las ollas used
to soften the pipes to attach the sprinkler
heads, heads wearing goggles and
ear plugs, then back
at the gluing table where Maria goes
on about a flu epidemic and about how she’s scared
her grandson caught it, and the smell
of burning plastic reminds you
of a doll your father bought
you at the Cherry Avenue Auction after
you nagged him for half an hour and he said
he’d only get you one thing so you
better be sure, and you said you wanted
that doll, and you remember
it came in a cardboard box and had plastic
limbs so hard you could barely
move them, and you smile and
tell Maria about this one time
you were nine or ten and you asked your father
for money and he said no, he said he had
to work for his money, so you got the idea
of washing the neighborhood’s cars for money, and then Joe
your brother wanted in, and then Timothy and Arthur
from two doors down wanted in too, so you’re all
going around asking people if they want
their cars washed, but nobody’s saying
yes, so you say, what if we tell them
we’re from the church and we’re washing
cars to collect donations? and after that
people start saying yes and let you wash
their cars for ten dollars a pop until
this one fucking bitter guy frowns and asks you
what church you’re all from, and everybody panics
and you cannot remember for the life
of you what’s the name of the church you go
to every Sunday, it has narrow arched windows and a red
steeple with a bird’s nest on one corner and a tacky wooden Christ
with blood that looks more like ketchup on his face and pews
that feel cold in the morning even with a sweater on and Timothy says, what church
do we go to? and then everybody runs, and later
you divide the money four ways and go
home, but the fucking bitter guy couldn’t let go
and knocks on your door and tells your dad what you were
doing, and your dad looks really serious, his usually slumped shoulders
suddenly straight, but once he closes the door after the guy leaves he bursts
out laughing and tells you not to do it again but asks
how much you made and then he laughs harder.
If the factory is
a kind of cathedral, this is how you pray—your hands, full
of blisters, holding on to pvc pipes as you imagine
the water that will run through them and back
into the dirt of someone else’s home. 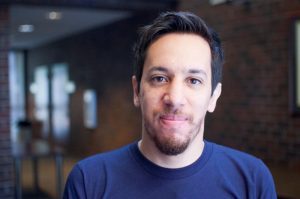 Daniel Arias-Gómez was born and raised in Guadalajara. He holds an MFA in Poetry from CSU Fresno. His poems have appeared in the American Poetry Review, Beloit Poetry Journal, New Ohio Review, Poet Lore, and others.