The house we stood in front of had a stained glass representation of the birth of Christ as a picture window. I put down one of my cases of beer and looked at Robert, my college boyfriend. The New Year’s Eve party was here?

Inside we saw that his friend’s parents were having a party of their own, a party that involved a nun sitting at the kitchen table with handful of small children in fancy dresses and Happy New Year tiaras. The nun was in full gear—habit and all—and the parents were cooking, listening to what sounded like a cassette tape of hymns. I said hello and followed Robert downstairs.

The furnished basement was filled with white Midwesterners in untucked flannel shirts drinking and dancing to Tom Petty. I made small talk with the girls. Robert changed the music to ska and started dancing in a corner. The beat was haphazard and Robert danced unselfconsciously, lifting his feet like he was running in place, elbows flailing, his glasses hardly staying on his face. I stood watching him and felt proud, like I was somehow responsible for him.

Our parents and professors were hoping we’d get married. Part of me was, too. We both came from über Catholic families. Robert’s father was a deacon who taught at the local Catholic high school, and his mother directed Religious Education. Robert was raised on family trips to the seminary and Catholic Trivial Pursuit (yes, it’s real).

I was just as interested and invested in my faith. I was a religion major, a volunteer hospital chaplain, a member of a parish retreat team. Both Robert and I had our struggles with faith, but we were working through them together. We were both believers. And this was how it went, I thought: I was twenty-one and believed myself to be an adult, and adults had serious relationships and went to church.

But there was a problem. While I loved Robert, I knew something was missing. There was no passion. Originally I thought this was a good thing because it made us similar to other role models in my faith life—people with solid marriages and loving families who were rarely physically affectionate. When Robert and I found ourselves along a similar path, I took this to be a good sign. We were doing exactly what we were supposed to.

Robert and I had started dating the spring of my sophomore year. The next fall I was studying abroad for the year in Ireland. We made a deal: if either of us found someone else, an opportunity, we would take it—but we would tell each other if it turned into something serious. And when Marlaine started staying over, I called.

Marlaine was born in Puerto Rico, raised in Germany, and went to college in Colorado. She was on my same exchange program and was in the same position I was— in an open relationship, in a new country—and we spent our time together. She would slip letters into my coat pockets, quoting Alice Walker: Don’t you know any kind of love is all right? I’d help her lug the groceries home (she always bought too much) and get her in and out of her bright red coat. We held hands in public places, and I’d proudly watch people stare. She would crawl into my bed while I was writing and fall asleep there, waking up and asking for a story when I curled in next to her. When I had dated men, I felt in control. I called the shots. With Marlaine, regardless of what we were or weren’t, I wasn’t in control. I felt reckless, inspired. This is love, I thought, terrified. This is what people were talking about.

Robert was understanding and, towards the end of our conversation, encouraging. In January he traveled to France for a one-month language program, and we met in Paris for a weekend. We sat in a run-down café, and he ordered for us in French. Robert said he worried he might be gay—he wasn’t dating anyone, but he’d been having these erotic dreams that left him feeling confused, and aroused. I was relieved, thinking we could help each other through this. But Robert thought otherwise: “I don’t want to be a homosexual,” he said. “I’ll just get over it. It’s probably just something I’m going through.” We didn’t talk about it again.

When I returned to Ireland, I realized that as romantic as Marlaine and I were, as invested as I’d become, she didn’t feel the same. We’d go to bed and I’d put my arms around her, and she would just squeeze my hands. She didn’t let me touch her. One night in her room I found a letter she was writing to a friend back home: “I wish I could love her the way she loves me. But I can’t.”

I moved back to Iowa. I started going out to bars, meeting men, because I wanted something safe and predictable. I wanted to be back in control.

Finally I went to see Robert in his hometown, and we spent New Year’s Eve with a nun.

Robert was beautiful—petite, with delicate fingers and prominent cheekbones, skin the color of wet sand. We were happy to see each other again. He gave me a tour of his folk’s house: a charming, typically-Midwestern home except for the stairwell, which was packed with Jesus figurines and icons. “This is the Jesus room,” Robert explained, taking the railing. “Hey Jesus, what’s up.”

We went for a walk around the neighborhood. The wind was bitter and whipped snow in our faces. He gave me his arm, and I held him close. It was late when we got back, and his parents were already asleep on the main floor. We were supposed to use separate bedrooms upstairs, so Robert mussed the bed in his room before coming over to mine for the night. We curled together, soft and warm beneath the covers. We kissed goodnight.

We fell back into our old roles that winter; it was easy to play the part of a well-adjusted young couple. We played cards with his parents. We went grocery shopping. We held hands at mass like we were everything we were supposed to be. And at night when we were curled up, his bare, bony chest against my back, his arm beneath my breasts, we talked in hushed tones of what it would be like when we met that someone, that one person, and really fell in love. 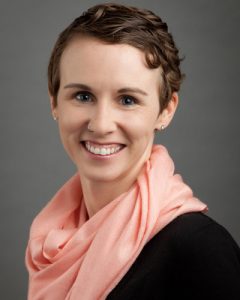 Laura Farmer is a book critic for The Gazette. She focuses on international works in translation, books from small presses, and novels by underrepresented authors. After traveling with the Big Apple Circus, Farmer graduated from the Syracuse MFA program in Creative Writing. She now works as the Writing Studio Director and Director of Fellowships and Scholarships at Cornell College and makes her home with her wife in Marion, Iowa.