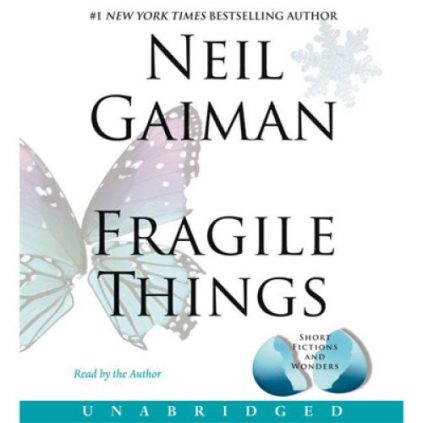 Neil Gaiman doesn’t know this but I’m devastated that the one time I lived as an NYC-expat was when he reigned as Neptunian king at this year’s Mermaid Parade. So, this summer, instead of reveling in my usual Coney Island haunts, I decided to grow a fishtail in my bathtub as I read the short fictions and wonders of Neil Gaiman’s Fragile Things, starting with “Forbidden Brides of the Faceless Slaves in the Secret House of the Night of Dread Desire.”

It’s been real tough for a salty chick to come by a laugh these days, so Gaiman’s satirical title promised me some fun. After first reading the graphic novel adaptation  of “Forbidden Brides,” illustrated by Shane Oakley, I then dove headfirst into Fragile Things for the original version, where I sought a tale of Gothic motifs featuring the forlorn creatures I’d hope to find at the old cemetery, manor ruins or writer’s desk.

As I read of strange fiends grappling with the art of mimesis, blood-bound ritual and breakfast toast, I loved how Gaiman’s writing offered more than just the levity of, say, seasonal escapism or parody. It offered coziness in a macabre world where shadows howl in the dark and night creepers crack jokes. Before I knew it… “somewhere in the night, someone was writing [a review for a Neil Gaiman story].”

“Forbidden Brides” spoke to the creative process, of how ghouls such as doubt and uncertainty make art as they roam with the writer’s pen onto the page, whether its contents have been summoned from the realm of fantasy, realism, horror, or the Coney Island boardwalk.

Although “Forbidden Brides” was a short piece that kept things odd and humorous, it reminded me that stories are vessels, transporting imaginations to worlds of the familiar (and unfamiliar) and transforming our understanding of those places, their ghosts, and ourselves.

Neil Gaiman’s fantastical tales set my mind abound with magic and terror, as I sunk into the clawfoot tub, book in scaled hand, and found myself at the Mermaid Parade in spirit.

Next up in the Fragile Things treasure trove is “Fifteen Painted Cards from a Vampire Tarot,” and you can bet Queen Amphitrite’s glittering seashell pasties that this short story’s title alone has already left mer-me shipwrecked, and feeling right at home. *This book blurb is part of our Summer Reading Recommendation series.spy offers | Nike