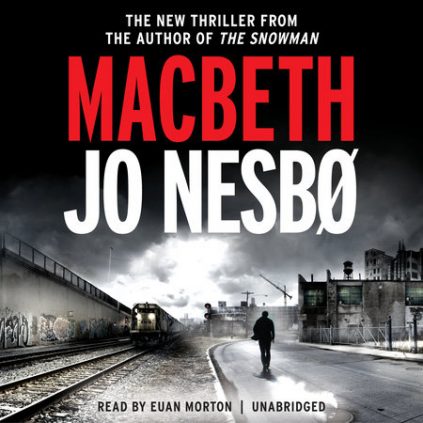 To mark the 400th anniversary of Shakespeare’s death, the Hogarth Shakespeare Project began inviting novelists in 2015 to reimagine the Bard’s canon in contemporary works of fiction. A number of writers were contacted, such as Howard Jacobson, Anne Tyler, Margaret Atwood, and Jo Nesbø, a Norwegian author primarily known for his Harry Hole series of hard-boiled crime novels. In an interview with the New York Times, Nesbø said that when he was given the opportunity, he told the publisher “if I can have Macbeth, then I’m in.”

Nesbø’s retelling of Macbeth is set in a gloomy, economically-depressed town somewhere in Margaret Thatcher’s UK: a dark, rainy place rife with crime and corruption. Following the death of a fabulously shady police commissioner named Kenneth (who has raised a huge statue of himself on the bridge into town) the visionary and idealistic Duncan comes into power, vowing to break the hold of the drug lord Hecate. Inspector Macbeth, a recovering addict, is the head of the police’s SWAT team. As the novel opens on a drug raid gone wrong we see our lead character in his larger-than-life, heroic, impetuous, conflicted glory. Macbeth is soon set on a collision course with Duncan, through the machinations of his lover “Lady,” who runs the Inverness Casino, and of Hecate, who sees Macbeth as a catspaw to finally cement his control of the town.

Perhaps knowing that readers would be hunting for the correspondences with Shakespeare, Nesbø lays out the characters and the scenario rather quickly in the beginning. Like many of his other novels, the opening chapters of Nesbø’s Macbeth are almost glacial in pace, and the author uses this time to introduce us to Duncan, Macbeth, his mentor Banquo, “Jack Duff,” the Norse Riders motorcycle gang, the trans sex worker Strega (“witch”) and her “weird sisters,” along with “Lady” and the rest.

Once the scene has been set, though, the action takes off and the world expands into gritty color and three-dimensionality. The elements of madness and the supernatural in Shakespeare’s Macbeth, which might have presented a challenge to an author trying to bring them into the modern day, are deftly handled by reframing them into the context of intoxication and addiction. As each character descends into their own struggle with the temptations of power and desire, secrecy and control, the allusions to Shakespeare fade into the new world of Nesbø’s retelling. Even though any reader familiar with the original play knows exactly what Macbeth’s fate will be, Nesbø’s story remains propulsive to the end. Additionally, the translation by Don Bartlett (who rendered the 3,600 pages of Karl Ove Knausgaard’s massive My Struggle series into English) is both lyrical and noir-esque.

The world-view and philosophy of William Shakespeare’s time are in many ways baked into the cultural consciousness of the English-speaking world, even in this post-postmodern era. There are echoes of the Elizabethan concept of fate in the way the media views drug abuse, for example, or the irredeemability of the criminal. As a result, it makes sense that “the Scottish play” can be such a natural palimpsest for a 21st century crime novel. Though times change, the human heart and mind remain what they were in centuries past, and perhaps have always been.