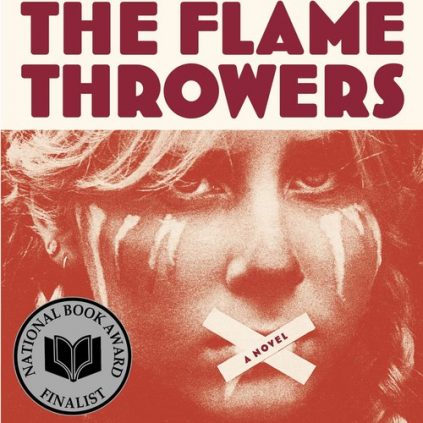 “The splendor of the world has been enriched by a new beauty: the beauty of speed,” shouted Filippo Tommaso Marinetti in Il Futuro in Fiamme, his Futurist Manifesto written in 1909. The opening scene of Rachel Kushner’s The Flamethrowers evokes this bold declaration: a vision of a sleek Italian motorcycle, screaming across Utah’s Bonneville Salt Flats. The hero, Reno—leather-clad and fearless—hits 130 miles per hour, her record-setting attempt.

The Flamethrowers is Kushner’s second novel, a National Book Award nominee, heaped with praise when it debuted in 2013. (“Scintillatingly alive,” wrote James Wood for The New Yorker.) From the ultimately doomed energy of the Futurism movement, the novel draws its energy, placing it sixty years later in the turbulence of the 1970s and across two continents. It co-opts Futurism’s nihilistic, misogynist attitude with a defiantly feminist slant.

The year is 1977. Twenty-something Reno rides her motorcycle from the Nevada city of her namesake to New York, seeking to expand her own art career. Like so many artists of her age, she’s operating under the belief that everyone, eventually, getspulled into the city’s orbit. Drifting from one Lower Manhattan neighborhood to another, she befriends a litany of eccentrics, documenting but never accentuating their peculiarities.

Reno meets and falls in love with Sandro Valera, a fellow artist, but also the heir to the fortune of Moto Valera. It is a massive Italian manufacturing conglomerate that not only manufactured Reno’s motorcycle but also harvests rubber in the Amazon with brutal efficiency, transforming the Valeras into a capitalist dynasty. (Sandro’s father, documented in various intervals, falls in with a crowd of budding futurists atop their primitive motorcycles, later killing Germans in World War I.) The company wants her to set a speed record, so the two journey to northern Italy. And much like Gianni Agnelli, who ruled over the automaker Fiat, the Valera family is glamorous, alluring, cloistered, intimidating, and ultimately disdainful of the American girl, who cannot begin to fathom such riches.

But violent political forces are lurking in plain sight, clashing with riot police and fascists alike, conducting kidnappings of capitalists, ready to smash Valera’s unfettered capitalism. Protesting the failed dreams of a mechanized future that has eluded the working class.

Marinetti saw this future reflected back at him from the snakelike chrome of exhaust pipes. Thanks to his breathless manifesto, Futurism seemed modern, fast-paced, exciting: race cars! Motorbikes! Going faster and faster, soaring higher on the new airplane, a revolution in technology, until the thrill of speed replaces the fear of death. The future was machinery and speed, impersonality reflected in mechanization, and shades of the Übermensch: man revolutionized, enhanced by technology and free will.

But it was also violence: patriotism by any means, nationalism formed along racial barriers, misogyny and anti-feminism and the glories of war, which Marinetti and his merry band of artists deemed “the only cure for the world.” Feminism was to be destroyed. The future was death by machinery, obliterating the old world: Marinetti’s “destructive gesture of the anarchists” would tear down libraries, museums, academia, what The New Yorker called “upheaval for upheaval’s sake.” In 1910, Marinetti littered Venice with leaflets calling for its “old, collapsing and lecherous palaces” to be torn down and fill the canals, claiming that this would allow the city to dominate the Adriatic Sea—a brash act of performance art reminiscent of the works that Reno encounters in New York.

When World War I erupted four years later, the Futurists got a chance to see this revolution unfold with deadly efficiency—for a few brief years, they seemed to get what they wanted.

Reno’s world is art and revolution, machinery and restlessness, and the always-implicit threat of violence. From a New York night with Saturday night specials drawn to a piazza of rioters, and atop a speeding motorcycle. Eventually, Reno escapes the trappings of luxury and finds herself among the proletariat, navigating both state-sponsored violence and female exploitation with a certain aloofness: what can she do, really? Later, Kushner details an artist named Ronnie, one of Reno’s lovers and simultaneously a source of comfort and rejection, staging an exhibition consisting of photographs of battered women, who he says beat themselves up, a preemptive strike against domestic violence.

So too Futurism attracted these young, restless men who didn’t know how to fit into this existing world, choosing instead to burn it all down—a philosophy that never dies.

What the Futurists were particularly good at, more than actually creating a coherent movement, was writing manifestos. Boy, did they write a lot of manifestos—about music, cinema, sex, noises, food production, and the hygienic benefits of a war. Kushner too declares her own bold truths, shouting brazen and stirring calls to arms, philosophical musings on the perception of emotion and the alienation. In long and sometimes plodding paragraphs, her characters issue forth twisting monologues that could never hold a real-world attention span; the aforementioned Ronnie spends seven pages detailing an around the world sailing experience he embarked on when he was 12, joining a strange older couple who may or may have not performed sexual favors. No matter. The novel’s overall tone relies more on artifice than plot, seemingly taking its time to get anywhere, really, its little manifestos far less impactful as Marinetti’s verbiage.

Futurism never caught hold, petering out with Marinetti’s death at the age of 67 in 1944. Aligned with Italy’s Fascist government, he tried to find a patron in Mussolini, but the dictator found himself bored with art, and propped up a diverse array of movements to keep them loyal to the regime. Futurism never found the success of movements like Dada or Bauhaus, never expanded its bleak philosophy, and rejected new forms of art like photography or film. Reflections on Futurism struggle to downplay the Fascist, misogynist tendencies, such as a 2014 exhibition at the Guggenheim, hand-picking its surviving art amongst the wreckage of attempted violence.

Instead, Kushner takes these elements of destruction and misogyny and co-opts them through her female protagonist.

In 1977, the city of New York fell into a blackout that would eventually last two long summer days. Riots and looting ensued. Escaping Italy, Reno makes it back to New York just in time to witness the arson and stolen televisions, wandering aimlessly and impersonally like De Niro’s character in Taxi Driver, minus his violence. From one dark hell of unrest to another, Kushner captures that kind of energy that we can barely fathom in a gentrified Manhattan—vivacious and sharp, as vivid and illuminating as an uncontrollable flame.