Heather—his youngest daughter, my sister, his baby, the one
who always gave in
when he needed money for rent
or drugs—left me with her three girls outside McDonald’s,
while she drove Dad
for a carton of cigs and a Playboy. The girls forced me
to play freeze tag. I picked
at my fingernails, ripping off a half-moon
on each hand. I remember the sky
sprayed the grass with sunlight
while Sophia and Chloe squashed the picnic
ants with their tiny fists. I helped
Penny look for clover, and when we found a four-leafed one,
somehow, no one cared. If I could go back, I’d press it
into my palm and say, Get ready. Soon
they’re going to find him dead in his apartment
across the street. The water will be running in the sink. 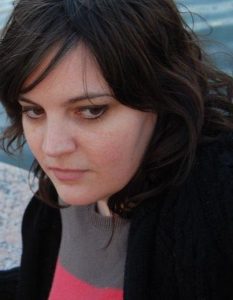 Stephanie Rogers grew up in Middletown, Ohio and now lives in New York City. She was educated at The Ohio State University, the University of Cincinnati, and the University of North Carolina at Greensboro. Her poetry has appeared or is forthcoming in journals such as Ploughshares, Cincinnati Review, Southern Review, Pleiades, Ninth Letter, Copper Nickel, and New Ohio Review, as well as the Best New Poets anthology. Saturnalia Books published her first collection of poems, PLUCKING THE STINGER, in 2016.

Stephanie Rogers
On Finding Nourishment and Sanctuaries: An Interview with Maggie Nowinski