When my lips hit the floor, I taste blood and think of kissing. The hardwood is gritty and scuffed from our shoes. I sit up and touch my mouth, find a feather from last night’s magic show. Richard keeps shouting the choreography, slapping his thigh to keep the beat. Camille pirouettes and leaps over the slick spot where I’ve deposited blood and saliva. I stand and join the line—shimmy, kick and pop—my feet more in sync with the throb of my face than the music. I remind myself that the ocean is different from land.

After rehearsal, Jeanette locks me out of our cabin so she can be alone with Baz, the new scuba instructor. My bottom lip is swollen and salty as seawater. Serena’s in housekeeping, so her cabin is much smaller than ours. She is willowy and German and firm in her belief that her job is fun. She keeps a stack of magazines, bright with pictures of muscle cars, at the foot of her bed, and in the dim light, it looks like an altar to the god of machines.

Serena’s thin fingers massage my mouth, anointing me with a sticky balm that smells like eucalyptus and marshmallows.

“I thought dancers were supposed to be graceful,” she says.

“Lie down,” she says. She rests a cool hand on my forehead. “Take your mind off it. Tell me a story.”

Before this job, I worked at an amusement park wearing a sweat-stained bear costume and hugging terrified children. Before that, I sold vacuum cleaners, and sometimes elderly women would invite me in for weak tea and stale cookies. Before that, I sold purple berries by the side of the road. I cleaned houses for rich women with Southern accents and read letters to the blind. Before that, everything was different. But the beginning is not important.

Two weeks before I left him, Kevin read me an article from the newspaper about a baby who’d been killed by his family’s golden retriever. The dog had attacked the baby for a stuffed frog. I brought him a plate of cinnamon toast and a glass of strawberry milk.

“What happened to the dog?” I asked.

“Euthanized,” he said. “So fucking sad.”

“It wasn’t the dog’s fault,” he said. “The parents should’ve been watching.”

“Why would you say that?”

He looked at me. Sugar shimmered on his bottom lip.

The princess is transformed into a vulture, sentenced to feast on the rotten flesh of the dead. But the rotten dead frighten her, and the princess begins to starve. That’s when the curse goes haywire. She turns into a duck on a sticky green pond. She turns into a basket of warm bread. She turns into her father’s crown, her mother’s slipper, the worn handkerchief of the enchanted prince she actually really loved, right up until she left him.

Serena kisses me on the forehead and tells me to get out. She has mints to distribute, clean towels and tiny soaps to release into the wilds of the ship. Her hair is very long and tightly braided.

“What’ll you do if they fire you?” she asks. “Do you have someplace else to go?”

“Not really,” I say and smile for no reason.

“You should try Germany,” she says. “Lots of castles. I’m sure my parents would love to fatten you up.”

In the hallway, I get stuck behind a herd of slow-moving Shriners from Georgia. They’re talking about burned children, crippled children. Their accents are familiar, and I stop moving. Their accents make me want to flicker out of my body, leaving only breadcrumbs behind.

The night of Kevin’s accident, he dropped me off at rehearsal, and after he left, I opened my bag and found a plastic spaceship inside. It was small and gray with flashing red lights, and he’d glued two little lump people made from orange clay into the cockpit.

He wasn’t as drunk as he could have been when he hit the median. He was tired, he told me later, and warm, and he’d been thinking of me when he fell asleep. We’d been together for eight months. I kept that little spaceship around for a long time—while I changed his diapers, while his muscles wasted, while he wept and threw spoons at me and refused to get out of bed those first few weeks he was home. I kept that spaceship around for as long as I could stand to look at it, but eventually I put it away, in a box under my bed that held my first pointe shoes and an ugly scarf my grandmother knit the month before she died.

At dinner, Richard sits across from me and makes his carrots dance.

“Maybe you should get one of those seasickness bracelets,” he says.

“It’s not seasickness,” I tell him.

Richard used to be a backup dancer for a pop singer before he blew out his knee. He looks like he could burn down the ship using only his eyes.

“I saw you dance once, years ago,” he says. “I cried, you were so good. It was like I could feel something trying to escape from your skin.”

Across the room, someone is singing.

“I think they sell those bracelets in the infirmary,” he says.

Across the room, a Filipina girl from the laundry staff is folding her napkin over and over. She looks like she’s about to cry.

After the accident, I quit touring and painted our apartment yellow and green. It felt like something might grow there. Kevin taught himself card tricks, and we planted a window herb garden that made everything smell like onions. We accumulated recipes and board games and paper lanterns. One morning I woke to find him parked at the foot of the bed, staring at my legs.

“If we get married,” he said, “I won’t be able to dance with you at the wedding.”

“Dancing is for suckers,” I said. I could still feel the warm pull of my dream. “And I thought you were anti-marriage.”

That afternoon, in my car, I got stuck waiting for a funeral procession to pass. I watched the slumped purple flags and the sliding headlights and imagined that Kevin’s accident had killed him. I saw myself at his funeral, curled into myself, cutting the palms of my hands with my fingernails. I saw myself weeks later, lying in the snow with no socks or shoes. And then I saw myself dancing, on a stage someplace unfamiliar, dancing like my body was untethered and light.

The car behind me honked. I forgot where I was going. I drove home, where Kevin asked me what happened to our pizza.

While we’re stretching, Jeanette announces her intention to marry the next man who kisses her hand.

“What if the guy has a huge mole on his cheek?” Camille asks.

“Who cares?” Jeanette says. Her neck is long and perfect, and she jabs bobby pins recklessly into her bun. “He can get it removed.”

“What if it’s inoperable because it’s attached to a blood vessel?”

“He’s not going to have a mole,” Jeanette says.

“What if the mole is hairy?” Camille asks.

Jeanette traces a finger over her sharp clavicles and looks at me.

“I have lipstick,” she says.

“Your bottom lip is a totally different color than your top lip. I’m going to put some lipstick on it.”

When the princess decides to return to her castle, she’s an earthworm. The mud in her kingdom is thick and mined with stones. Her progress is slow. When she finally makes it home, her palace has transformed, too. It’s just a bunch of popsicle sticks patchworked with cardboard, a twisted tinfoil spire at the top. The windows are pink and yellow tissue paper, and when the sun threads through them, the mud lights up and looks holy. The worm princess inches along, careful to keep moving, careful to avoid being swallowed by the mud.

When I said it, I wasn’t sure that I had said it. One moment it was just a wavering droplet in my mind and the next it had saturated the living room with its meanness. Kevin looked like he wanted to hit me, but he couldn’t. He’d had a bad morning at physical therapy and come home with more exercises, a stack of useless paper illustrated with stickmen contorting themselves like cats.

But he just sat there. After a while, he swerved his chair into the coffee table, knocking off an empty cup and a bag of quarters for our laundry.

During my costume change for the Sixties montage, my head gets stuck in the armhole of my leotard. That’s not so bad, but when I change for the Foxy Disco number, I have to leave the twisted leotard on underneath. This becomes problematic when I have to change into my Eighties workout gear, so I miss that number. Richard’s eyes smolder from the other side of the stage. A stagehand produces a boxcutter and frees me just in time for me to throw on my black sequined gown for the finale, but as soon as I get to center stage, I trip over the skirt and fall so my face comes dangerously close to the stage lights. The lights are hot on my skin, and I feel my nostrils glowing.

The other dancers retreat to their cabins as soon as the curtain closes. There is no encore. Richard comes out and sits next to me on the stage.

“It could come back to you,” he says. “You used to be so good. What happened?”

I feel my body begin to dissolve.

We’re two days from Florida, and I stand on the deck in the dark, wondering what I’ll be by the time we get there. Maybe I’ll be something useful this time—an umbrella or a pair of crutches or a flashlight that’s weak but still working. Maybe I’ll be less substantial, like a towel worn thin by the tumble of dryers. Maybe I’ll be an earthworm wriggling through shit.

I know the ship is rocking, but it’s so big I can’t feel it. Maybe this time will be different, and I won’t change at all. The ship radiates its own light, so bright that I can’t see the stars. My body feels disposable, but I let my feet be feet, my arms be arms. I stay on the deck for a long time. I let the ship carry me through the darkness toward my kingdom. 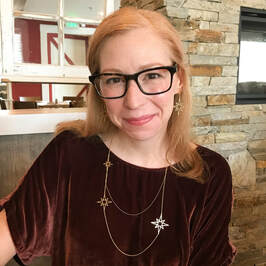 Aimee Pokwatka grew up in Wheeling, West Virginia. She studied anthropology at the University of North Carolina at Greensboro, where she spent a lot of time in a room whose walls were lined with boxes of human skeletal remains, and she received her MFA in creative writing from Syracuse University.
​She has worked at Blockbuster Video, where she rewound and shrinkwrapped VHS tapes, and as a veterinary technician, where she expressed anal glands and once tended to a lion cub from the circus. She has also taught writing to middle schoolers, college students, and adults, and served as the editor of Salt Hill Journal and The Newtowner. She lives in New York with her family.