Elixir of the East

“There is a certain Love that is formed out of the elixir of the east.”
–Rumi

I’ve seen you in souks that spill with people,
on streets that reek of three continents,

found you filling cut-glass crystal with the scent
of nine woods and the rose petals of three cities.

You shone through petrol-smoked markets in pearls
of resin gum, bangles of bridal gold, and thin fingers of saffron;

Behind the glass of TV sets, western tongues have
long worried the meat of you: Palestine; Iraq; black oil.

If I could bargain you back from insurgents and armies,
from the pockets of Royals, Presidents and IS

I’d place you in the hollows of my body: the naked wrists,
the downturned neck; these deserts starve for your rain.

The Eyelashes of a Century

heels as they walk the corniche in the well-heeled
Raouche district. Even the sun is reluctant to leave

lingering on the bare arms of couples, a prelude to the
coming caress of a Beirut night: the smell of hot za’atar

always in the air, and the soughing of the Mediterranean,
always the water, flatter than an eye of unwinking turquoise

constant as the voice of Fairuz whose voice is wed
to the city and the people. Her music drifts out of cafes

spreads a lithe body of oud strings and croon across the
discotheques and lidos, in the debkiyaat of the wedding halls

where brides gift their loved ones with the sugared almonds
made fashionable in France. Come the weekend, the city

vacates to Tyre where the small body of the murex
gave the Patricians the color purple, and the Phoenicians

an empire so small and bright it was mistaken for
a mote of light tangled in the eyelashes of a century. 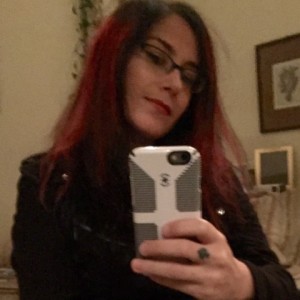 Majda Gama is a Saudi-American poet based in Washington DC. Her poetry has appeared in Gargoyle, Beltway Poetry Quarterly, Beloit Poetry Journal, and The Fairy Tale Review.