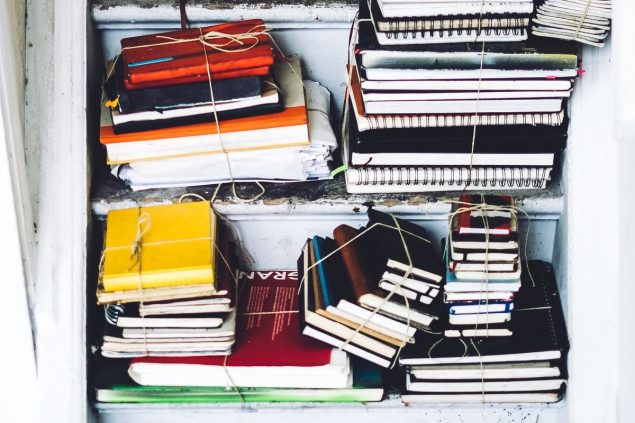 Flood water smells old. It smells like something decaying, like something that has been left out for too long, like a mix of oil and compost and mold. Flood silt is heavy. It sticks to everything it touches. A pair of blue jeans covered in it is almost too hard to carry. I know these things. I know what it feels like to walk down a block lined with more appliances than trees and more garbage than grass. Facing clean-up and recovery is lonely—deep in the bones lonely—and while part of that loss of control means surrendering to the awful thing that has happened, another part means accepting help—from friends but also from strangers. And that’s why I also know what it feels like to have a stranger walk up my front porch steps, ask if she can take the pile of muddy, wet laundry from my front yard and wash it for me—and to not know what to say—and to finally say yes—and to have my life change forever because of that one word.

Early this fall, Tropical Storm Irene swept through my home state of Vermont, my town, my street and my home—and all of a sudden I was inside Marble Boys, my middle-grade novel about Hurricane Katrina, in a way I had never, ever, ever imagined.

I began to write Marble Boys in September 2005. The story was born out my son Luc’s question, “Who exactly is going to get my blue jeans?” as we dropped off a bag of food and clothing for the Hurricane Katrina Relief Drive at the Vermont State Police Barracks. I didn’t know how, exactly, to answer his question. I didn’t know who would get his blue jeans. But it—or he—stayed with me. This mystery person. Who would he be? Would he be Luc’s age? Would he love to skateboard too?  Play the trombone?  Be afraid of making telephone calls? And so I began to imagine: What if a boy in Vermont named Henry donated a pair of his blue jeans to the relief effort in New Orleans and a boy named Zavion got them? And what if Henry put his lucky marble—which he had just deemed unlucky because of his own terrible tragedy—into a pocket of those pants?  And what if Zavion found the marble and wondered who had given him this magical gift?

Like any good writer, I did my homework for this story. I read many articles and blogs—first-hand accounts of what it was like to be in New Orleans during and after Katrina. I interviewed people. I watched countless documentaries about Katrina. I also read articles on post-traumatic stress disorder and, in particular, the way children are emotionally and psychologically affected by natural disasters. And finally, I read Chris Rose’s 1 Dead in Attic: After Katrina, which is a compilation of his stunning stories that appeared in the Times-Picayune.

I felt as though I knew—as best I could—what it had been like during those harrowing days during the hurricane. I was emotionally connected to the incredible people who had survived such a tragic disaster and my heart was bursting with empathy. It was from this place that I wrote Marble Boys.

But now—after Tropical Storm Irene has seeped into every corner of my life—Marble Boys has become exceedingly more personal. The outpouring of help that my community, my family and I have received is staggering. Strangers have shared in the very real and physical process—hauling soggy, disintegrated boxes out of my basement and then donning dust masks to disinfect its floor and walls. They have also shared in my equally real and emotional process—crying with me as we tipped a too-heavy box of my children’s waterlogged art into the dumpster.

At one point during the hauling and dumping brigade, someone brought yet another box up from the basement and gave it to me. I was standing outside by the dumpster making decisions about what could be salvaged and what had to be thrown away. (Most everything had to be thrown away.) I opened the box, as I had opened all of the others. Photographs. The box was filled with photographs. And I began to cry. They were soaking wet and covered in mud. A picture of my siblings and me at my wedding, a picture of my sister the first time she made Luc laugh, a picture of my newborn daughter in my mother’s arms. I stood and stared at the surely ruined photographs. I knew there were dozens of similar boxes, also full of photographs, still in the basement. And I knew I had to throw them all away. But standing there, with this box in my hands, I just couldn’t do it. A friend put her hand on my shoulder and gently suggested that I put the box aside. I could make the decision later. I could throw them away later. I went back to sorting through clothes, winter boots, books and manuscripts, filling the dumpster bit by bit. Hours later, as the sun was setting and I was still receiving boxes from the basement and throwing things away, I took a break and walked over to the lawn at the side of my house.

What I saw took my breath away.

A group of people—people I didn’t know—were sitting on the grass saving my photographs. One by one, image by image, memory by memory. Someone peeled the photos apart, someone rinsed them in a shallow bin of water, someone laid them out in my shed, and then finally, someone hung them on a clothesline to dry. They hadn’t talked to me about it, they just did this meticulous, time-consuming, oh-so-intimate work.  I was struck, in that moment, by the smallness of the objects—these photos—and by the vast enormity of their meaning to me.  I didn’t know these people and yet there they were, their hands and eyes and patience and generosity all over the documentation of my life. By crossing into that intimate space, these amazing human beings took on some of my actual grief and suffering. They helped me begin to transform and heal. Accepting help became entwined with growing an incredible sense of empowerment, liberation and connection. I am still struggling to express the magnitude of what happened to me, but in the end, these strangers and I—we became friends.

This is what happens between Henry and Zavion in Marble Boys.

Life has imitated art, which leaves me on-my-knees humbled by the lessons I have learned. I have stumbled into a simple epiphany that goes something like this: Knowledge and understanding with humbleness is truly the best we can offer.

I know now that I got Marble Boys right in so many ways, and I am grateful for that, but I also know that I still have more to learn, more to revise, more to get right—and I am absolutely ready and eager to incorporate all of these new lessons into this manuscript. Most of all, I am holding very tightly to my heart my new and real understanding that experiencing our own suffering in connection with others—connecting in our basic, common humanity—transforms that suffering into something healing, intimate, and deeply profound.

Just two weeks ago, my family was given a bag of winter clothes, and in it was a pair of snow pants, exactly Luc’s size. And Luc remembered, and wondered all over again about his own donated blue jeans. Am I any closer to answering his question, “Who exactly got my pair of jeans?” Maybe. Maybe I am.

To Read An Excerpt from Marble Boys, click here.

An Excerpt from Marble Boys