There was always Montaigne. “Of Cannibals.” “Of Drunkenness.” “Upon Some Verses of Virgil.” The stranglehold of imperialism. Books. Thumbs. Dead fathers. He is the sixteenth-century headwaters of the essay, the textual meanderer, the French progenitor of Emerson, Shakespeare, and Descartes. Montaigne haunts us all, more momentousness here than torment. I dwell on his death as much as the death of my own father, a writer, like me.

A recent article dubbed Montaigne the “godfather of blogging.” His pioneering style seems to have anticipated, among other things, the anxieties now arresting nonfiction. Montaigne made the most of his century’s science and philosophy, freely copying from Horace, Virgil, and other ancients, and going un-fact checked. It was not the generation of thoughts but their recording that was his business.

I have trouble being so brazen. I am more like my father in this way, with whom I share a face, outward friendliness, crippling insecurity, and book-ardor. It was he who stacked novels on the mantel, made it seem less strange to squirm behind a desk, wanted me to write.

Near the end of my father’s life at a Dallas nursing home, where kind-lipped West African nurses cared for him like a newborn, he repeated confessions of wasted youth, his thirties spent carousing and womanizing, lost in a pinball mind. At fifty, he packed up and trucked our family to Lubbock, Texas, to start his own journalism business, to write about football.

But his work was never a success. My mom floated him on her teaching job. And then Dad grew a tumor that, when he was fifty-nine, swelled and crowded his brain, stole his ability to write.

Everyone wants what is lost. Sixteenth century Europe: Constantinople sacked. A re-appropriation of the classics. Montaigne fit in. His father, trying to fashion nobility, ensured his son’s first language was Latin. He was a pampered child of the classics, but his Jewish mom’s poor family was burned in Spain. He later entered parliament, believing government at odds with justice. “How many condemnations have I seen that are more criminal than the crime?” he wrote.

He was a man broken in his time and out of his time, sensitive but elitist. There was an unaccountable, contradictory storm in his personality. “Essays were designed to record the flux and flow of his daily existence,” writes his biographer Donald Frame.

While Dad labored as a sports journalist, he wrote nonfiction essays. They were endearing and candid in their way, monographs he had printed and bound at the copy center. I remember him leaving one there, saying, “Someone will want to read it.”

Growing up, I assumed he owned a playbook that told him how to write, but I see now that he was charming fate, waiting for a break. Maybe he was enabled by my supportive mother, and his sportsaholic friends to compile football narratives, and mostly ignore what was lurking in his consciousness, along with that tumor — the engulfing need to explain himself.

By most accounts, the greatest impact on Montaigne’s life was an ugly man named Etienne de la Boetie. To Montaigne, he and Boetie were “two halves of the same soul.” Boetie gave Montaigne his skepticism and his ideas about beauty. They carried on “the most remarkable of friendships.”

Boetie died four years after their meeting. On his deathbed, he sent his wife away, and passed his final moments with Montaigne, murmuring his name over and over and over, his loss giving Montaigne a reason to create art.

When my father died, I felt only a quiet numbness. I had eleven years to prepare for his death, but it still left me frozen. It took me three more years to learn what he’d taught me: that every letter counts, and so do the spaces between them.

The death of Montaigne feels more visceral than the death of other writers, the silence not of the loon but of the wilderness. He was aware of multidimensionality, the contradiction of existence, of laying bare his bifurcated humanity. “My history must be adapted to the moment,” he wrote.

Montaigne fretted constantly about kidney stones. They’d killed his father, and he searched Europe for a cure. In the end, he died from a severe case of tonsillitis at fifty-nine, the age at which my father stopped writing.

His is a lesson I’m trying to learn, that I cannot reduce Dad to a sentence, nor to a period after which my life begins.

With Boetie gone, Montaigne’s essays filled “a vigorous need to communicate,” his biographer Frame suggests. Montaigne wrote to talk to the dead.

His work to me is a force of nature, not a story, an is that emanates from his need to analyze himself. “I try to give knowledge not of things, but of myself,” Montaigne wrote. And by that I believe he means Boetie too, the way I write to talk to my father, the person whose DNA and mind I am woven from. Like Montaigne, when I direct my gaze inside, I hope to find that mentor, father, friend who seems to have left his fingerprints. And until the last word falls, I’m looking for a way to recover that once entwined personality that left a space for me to fill. 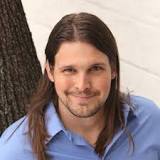 Clinton Crockett Peters has been awarded literary prizes from Shenandoah, North American Review, Crab Orchard Review, Columbia Journal, and the Society for Professional Journalists. His writing has appeared in Orion, Southern Review, Hotel Amerika, The Rumpus, and many other venues. He lives in Carrollton, Texas.