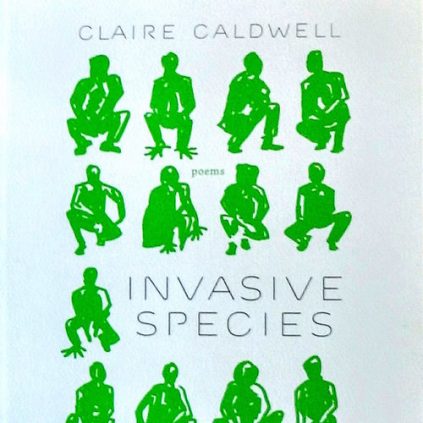 poetry collection, Invasive Species, offers a unique perspective on climate change. Through juxtapositions between the natural world and human civilization, wildness and order, catastrophic climate change and everyday personal dramas, Caldwell questions our place on Planet Earth, and the roles we as humans are playing in our interactions with it. The poems acknowledge the absurdity and cruelty of how human beings treat our planet, but also recognize the weight of our individual experiences and emotions, the intimacies we usually focus on while ignoring our environment. Caldwell’s poems manage to explore substantial themes with an intimate gaze; the humor is simultaneously empathetic and darkly cynical. Take the title poem, which opens:

Once, we built towns on water park economies.
Slides reared up like dinosaurs, pale plastic beasts
engineered to outlast our kids.

We kept driving. Though moths
coated power lines like pipe cleaners,
we kissed freely. We were complicit.

Caldwell’s use of “we” suggests a collective responsibility. All humans forget the consequences of our actions on a global scale and choose instead to focus on family or love. While the speaker is understanding of these human desires, she highlights the individual’s personal accountability by admitting that she (like all of us) was “complicit” in some way.

Caldwell’s choice of animal imagery, such as “dinosaurs” and “moths [that] coated power lines like pipe cleaners,” suggest a kind of disturbed innocence, a perversion of childlike fun. A water park intended for child’s play morphs into a zoo of “pale plastic beasts,” an apt metaphor for the way we’ve changed our planet, not realizing it. The plastic that makes up the waterslides might be derived from the residue of the dinosaurs, petroleum. While the dinosaurs aren’t literally alive to harm us, Caldwell awakens them again as a means for the planet to take revenge on us.

That is, after all, what nature does in Invasive Species. While nuances in the human-earth relationship are delicately explored, it is eventually clear that the planet is stronger than human ego. In the masterfully biting section about Timothy Treadwell and Amie Huguenard’s fatal pursuit of the grizzly bear, Caldwell does not spare her opinion on humans whose hubris allows them to try to manipulate and conquer nature. For example, in the section Descent from the poem “Grizzly Woman,” the speaker examines the experiences of Treadwell’s girlfriend, Amie. The poem begins:

I arrive like a drug
plunged through a central line.
Amber, translucent. Flushed

into Kaflia a third season,
rust-flecked hills spread
like a girl’s legs.

The poem’s relationship to this event is complicated, and has much more compassion for Amie than for Tim. The words “plunged” and “flushed” imply a lack of choice, and yet she arrives in Kaflia with him, where she perhaps should not be.

The image of them entering the Alaskan wilderness like a girl’s spread legs has a violent connotation. The message here is clear: Timothy Treadwell’s grizzly bear obsession was an extreme example of the foolishness of imposing oneself onto the natural environment.

In a different section of “Grizzly Woman,” Obituary, Amie dares the reader:

Say we asked for it.

By employing a phrase highly associated with rape culture, the poem asks the reader who the actual victim was. Caldwell seems to suggest that while the bear may have killed Amie and Tim, it was in fact the victim.

By morphing the Alaskan hills into a human body, the poem also suggests that in order for us to feel like we truly understand nature and our relationship with it, we must humanize it. In an excerpt from “A Seamstress Considers The Fourth Dimension,” Caldwell continues along this vein:

Here the speaker projects her idea of human progress upon the small marks made by a moth in fabric. She imposes a textile upon the sea, and tapestry upon ocean reefs.  Is this imposition a futile and silly pursuit? The poem suggests that it just might hinder true understanding of the natural world. It is, however, a way for humans to control nature. Take “Just Give Me One More Thing”:

Above the alley, we’d strung our laundry up
like prayer flags. I watched as the wind
nudged your jean shorts and my orange
halter. You fussed with a can of tuna.

It had been a good month, sandal weather,
and no one asked about your missing toe.
We never burned our English muffins.
We traded spots at the counter,
the sink, rarely touching.

The poem begins with an impression of domestic orderliness. There is a peace and neatness to the way the laundry has been displayed, nature (the wind) has only enough power for a weak “nudge,” and the biggest problem is opening a container of dead fish. There is also a sterile quality to the way they avoid touching, which suggests a kind of fakeness or formality, a forced interaction. Despite these efforts at order, they eventually prove futile when matched against the wilder forces of nature:

Still, the flies gathered. Bluebottles
slurring circles around the trash can.
I set vinegar traps and dreamt of buzzing.
You remembered your father, the smell
of him, how you couldn’t eat for weeks.

“It’s something we all have to face eventually,”
you said, as I bent to tie up the garbage.
Maggots sprayed across the kitchen like champagne.

The second half of the poem reveals the inevitability of nature triumphing, even if the overpowering forces are small insects. Death is just as much a part of nature as maggots are, which figure as his messengers. They remind the speakers of their mortality and powerlessness. While the message is bleak, there is a strange and grotesque beauty. During her attempt to be orderly, maggots spray “like champagne.” Thus, a celebration of death occurs, albeit a dark one.

Caldwell’s poems are skillful in their ability to investigate large topics like climate change in a relatable and interesting way. The poems are often full of dissonance and strange juxtapositions that reflect our relationships with the planet and each other. If you want to read poems that can gracefully bring together a medical student, a decomposing blue whale, an adult skull, and a Portuguese butcher (as in the collection’s final poem “Osteogenesis”), then you should read Invasive Species. Its wit and strangeness just might forever change the way you see whales, bears, and climate change.

Claire Caldwell is a poet and editor living in Toronto. She was the 2013 winner of the Malahat Review‘s Long Poem Prize, and her work has appeared in many magazines and journals, including Maisonneuve and Prism International. Claire holds an M.F.A. in Creative Writing from the University of Guelph.short url link | 【国内5月2日発売予定】ナイキ ウィメンズ エアマックス ココ サンダル 全4色 – スニーカーウォーズ

The Gifts of Ratoncito Pérez
by Joe Baillargeon