Blog - Latest News
You are here: Home / Interviews / “Little Grace Notes in a Story”: A Conversation with William Marquess
<... 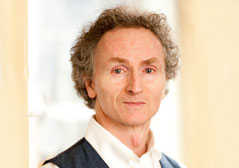 The office of William Marquess is small but colorful. There is mischief here: rows of books, equal parts vibrant and muted, line the walls, and a herd of plastic and rubber figurines stare impassively from his desk at all who enter. Pictures and poems and paintings galore are tacked to free wall space. Yes, there are stacks of papers and drafts cluttering the odd corner as, it seems, with all academics. There’s also a sense of uncanny order.

I met Professor Marquess, or Will as he is more fondly called by students and colleagues alike, in the fall of 2011. He taught my first-year seminar with a reserved grace, encouraging an unlikely comradery from a collection of disparate Freshmen. He coaxed curiosity from even the most poker-faced, the most wooden.

I met the author Will Marquess a few semesters later, when he led a fiction writing workshop and steadfastly participated in the process with us all, from initial “seeds,” to the self-explanatory “shitty final draft.” In 2016, he published a collection of short stories entitled Boom-shacka-lacka with an interesting twist: all of the pieces had been, in some part, a product of a workshop he had taught, including my own. I recently got the opportunity to sit down with him. We discussed world wisdom, words, and the weather.

Laura Kujawa: What are you reading right now?

Will Marquess: My reading is almost always shaped by what’s happening next in class or next semester as I’m planning for it, which is, by the way, one argument in favor of not teaching anymore, that I would have time to read just for my own bloody self. Last week we read a story by George Saunders, which was quite wonderful and weird, ‘The Semplica-Girl Diaries.’ And I’m reading the brand new Best American Short Stories–always comes out just in time for Christmas shopping–because that’s what we’ll use in fiction writing workshops in the spring, and that’s always just an act of faith. You know, I like some of the collections better than others, but we’re just going to use it and make the most of it, because it’s fresh and I’ve never taught any of those stories before. I’m just looking forward to reading more stories.

LK: How would you describe your own writing?

WM: Besides torturous? [He laughs.] I don’t know quite how to describe it. But I will try, of course. I’ll try a couple of stabs.

I think I tend towards realism. Just thinking about types of writing—and I know there are limits to that but I hope to be aware of them—if realism always is an aesthetic construction and it’s made out of words and it’s not real people. And yet, when I read, I’m most often interested in thinking about people, and how they behave. And at the same time, I’m always interested in calling some attention—that may not be the right way to put it, because calling attention means that I’m trying to get a certain effect—but being aware of language as I’m writing. Sometimes it’s just little puns or twists of language, sometimes it’s built into the story.

[One of] my favorite stories of my own in recent years is about a guy who makes up languages, who’s in the “constructed language biz” and he’s inventing a language. He’s at a conference for “conlangers” as they’re called, constructive language people, which is a real thing that I read about in The New Yorker and thought, wow, this is interesting. This is fun. There’s another one about an eleven-year-old girl—I think that may be the one I wrote in the workshop with you—which has some invented words because she’s eleven, and she’s “freeping” and “thirling” around and I enjoy that kind of wordplay. I’m interested in people, and language, and how we understand [people] through language…so I’m a linguistic realist or realistic linguist or something.

LK: How is it that you write—what’s your secret?

WM:  Deadlines. We were referring to this perhaps before the recording began. Deadlines are what makes it work for me—and part of me thinks “well, that means you’re not a real writer, because real writers just write, just have to write, and they don’t need deadlines.” But that’s probably hogwash. I think most of us, even the so-called real writers, propose their own deadlines. It’s why I’ve been so pleased about the process in being involved in my own writing workshops, which occasionally feels selfish on my part, that I’m just indulging myself and imposing my own writing on the students…but mostly I don’t think so. I’m always apologetic in case a student might feel that way, but mostly I think they’re thrilled that—man, he’s doing it too. We get to see what he’s doing too. And it means I just have to get a draft done. So that’s a somewhat facetious but also honest answer about how it happens…I just have to impose that kind of external impetus to make it happen. Shame myself into it.

LK: I found myself on your profile on the College’s website, and under research it says, “my research consists of reading as much fiction as possible and also just paying attention to the world.” Any world wisdom you’ve stumbled upon—any writerly moments lately?

WM: When you mentioned the word “wisdom,” I thought oh god, I don’t have any of that. And I hope it’s not false modesty. I’m wary of people who think they have wisdom. Probably the greatest wisdom is to know that you don’t.

But I’m stumbling on things all the time. It’s just paying attention to things as much as possible. When the power went out this morning, and I had to grope in the dark to find some candles, I thought well, I could use this. I haven’t figured out what the weather is in the story that I’m writing right now, but weather’s almost always interesting because we live in it all the time. If nothing else, it gives you texture, but it often also gives you character, because everybody has feelings about kinds of weather and reactions and ways they deal with it.

I wouldn’t call this wisdom, but if there’s any wisdom in it—I hope—it’s being aware that everything counts. Anything could become part of a story. This is one of the more important things that I might be able to teach my eighteen-year-olds who might come in thinking, “well, the way you write a story is that you come in with a plot, and you have this big twist, and then it ends with a surprise.” And that could work. I’m not going to tell them that it’s wrong. But I’m going to ask them to think about the weather. Or write a car scene. Or what kind of food this person hates. And those little things could be only little grace notes in a story, but they still could be the texture and the way we actually know a character.

LK: I wonder if we could talk about Boom-shacka-lacka. I remember you using that phrase in class, and I’m curious where it came from. What does it mean to you, and why did it make its way onto the cover of your collection of short stories, and into the foreword, where you go into your experience with cancer?

WM: As far as I’m aware of its origin, it comes from [the band] Sly and The Family Stone, “I Want to Take You Higher.” There’s a bridge, a break in the melody a couple of times where it comes back to “Boom shacka lacka lacka, boom shacka lacka lacka,” [he sings the baseline].  And that’s always just spoken to me as a little piece of rhythm and language that appeals to me. It’s purely self-indulgent, egotistical—I just like it.

The way I use it in the foreword to the book is maybe evasive, because that’s a piece about having cancer and understanding one’s mortality and how impossible it is to articulate anything about it, so that when I’m asked about it, here’s what I have to say: boom shacka lacka. Maybe if I were smarter I would have greater wisdom to articulate it. I think it’s also that the response to that question is life its own damn self, and one way of expressing that is “boom shacka lacka lacka, boom shacka lacka lacka, boom shacka lacka lacka.” It’s being in a moment, living with the rhythm of music and language. That’s the only thing I know how to do when I’m thinking about the fact—which is true for all of us, not just somebody who’s been through cancer—that I’m dying and that I won’t be here forever. And it makes me feel alive.

LK: Why is fiction what does it for you? Where did that come from and how did it start?

WM: Where it comes from is an intense curiosity about people and myself. Where it started was ‘see Jane run.’ ‘See Dick walk.’ It started with a kindergarten primer that excited me because these are words. These things that I’ve been saying for years now, they’re actually on a page and I can connect one to the next, and you keep connecting them and they reflect something about human brains and hearts and what magic that is.

It’s not only stories. Poems are just as thrilling to me. Either I’m not as good at writing poems, or I’m better at writing fiction…maybe that’s the more positive way to put it. So that’s where I’ve spent more time. But it’s consciousness of language and how mysterious it is, and often beautiful and often frustrating.

LK: That’s lovely. I can’t wait to write this all down!

WM: Try not to be such a perfectionist…It’s lethal. Fatal to a writing career if you allow it to overwhelm you, because you’re never going to create perfection, and you have to let it go. That’s a lesson about life too. We’re all going to die and my life is less perfect too, day by day, and I’ve been proving it for the last half hour! And I have to let that be, and make the most of it.

Don’t go into this thinking you’re going to write the next great novel. Go into it with an interest in a little piece of energy. The way that woman walks down the street. Or the way that girl thinks about her mother. The way the great uncle creates goulash. Those are the little things you make stories out of.

That seems picayune, but it’s the substance of somebody’s life that I respond to in fiction. It also—and this is maybe the closest to wisdom that I can get—It does help me appreciate the world more. Thinking as a writer makes me pay more attention to things…instead of just my own default settings, the way I normally respond to things. It’s making me think about the way other people would. The Morning after the Hometown Diner Burned Down
by Mike Alberti