Lois Fleming and Bob Cuso are ninety-five years old, and they’re not married. It’s a scandal—they’re living in sin. I asked Lois was she a native, because that’s what you always ask. And she says, Heavens no, as if nothing could be worse than to be a native of this place. She came to Cape Cod from New York in 1936. So back then she was what, twenty-two? She was married to Fred Fleming, and then he died.

Lois met Bob on a cruise. She shows me these old pictures, and it’s too much, I can’t take it. She used to ride the great ocean liners—the Normandie, the Empress of Britain. The opulence of those times, and those people, I mean it’s hard for me to understand. Plus, Lois was a knockout then—it’s very strange to see these photos of her. So she met Bob in San Francisco. He was a cartographer, sailing for the Straits of Magellan by way of Valparaíso and Santiago. She tells me about how they danced together in the grand ballroom, and then walked on the promenade in the moonlight. Bob took her arm and explained how the old explorers used to navigate by the stars. She was smitten, of course. Out of her head with love. But they still haven’t gotten married, and it’s what, seventy years later?

Today, Bob wears metal and pearlescent studs all along the seams of his pants. He has this little tool that puts them in. He tells me, Bring me your pants, I want to put these nice pearly studs in them.

Are they rich? Let me tell you. They can’t even lift their hands—from the diamonds, they’re so heavy. They have this house, it’s like a palace, and they live on thirteen acres. It used to be something like twenty acres, but Lois gave the land as a gift to the Village of Eastham. Her father bought the house as an investment in 1908, and Lois says he got suckered. Nobody ever paid more than 800 dollars for the property before that, and he’s paying four thousand. It’s a mansion, it’s got all these little outbuildings and gardens, and he paid four thousand dollars for it. And now Lois and Bob have all these people taking care of the place. Every time I come here, there are people trimming the shrubs.

I cook dinner for Lois and Bob five nights a week. What do they eat? Well, tonight I made them lamb chops, shredded into little pieces. They also had mashed potatoes, and Chivas Regal. A little while ago, Lois tried Dewar’s. But she did not like that. She didn’t like it at all. It’s cheap scotch, she says.

Tonight I’m standing in the kitchen, making dinner for Lois and Bob. Lois is in the living room, sitting in front of the television, she’s talking to me and I can’t understand a word she’s saying. Outside the kitchen window there are three deer, just standing there. Chewing on grass. They’ve been standing there for twenty minutes. I’m looking at them. They’re huge. What kind of deer do we have on Cape Cod? I don’t know, a deer is a deer is a deer. These ones are the kind with the bushy white tails.

But listen, it gave me the strangest feeling—like I was watching my own funeral. It’s seven-thirty, the sky is all pink and violet, I can see the sun setting over the dunes on Lois’s property. She has her own little cove, off the bay. Everything’s peaceful, there’s a nice breeze, and the deer are standing there. They’re looking at me, they’re looking at the water. In the living room, Lois is still yelling at me.

I go into the living room to see what she wants, and she says, There you are, Margaret. I have a question for you. Are you attached, Margaret? And I say, No, I’m not attached. And she says, Because I know a man in Florida who’s very interested in you.

And she drives. At ninety-five, she’s driving. They both drive. Bob and Lois each have their own car, a Buick and a Lincoln Town Car. Who knows where they go?

They’re the kind of people who like to give things away. When they like a book, they buy twenty copies of it and give it away to everyone. So now I’m reading Stones for Ibarra, by Harriet Doerr. It’s very good, it’s about these people who move to Mexico—they’re trying to rebuild some kind of mine. The author’s name is Doerr, D-O-E-R-R. She went to Smith College. I also have the DVD, the Stones for Ibarra movie. Lois gave it to me. It’s still in the shrink-wrap.

So anyway, I’m back in the kitchen, trying to finish dinner, when all of a sudden Bob and Lois start yelling at each other. They’re fairly screaming. Again I rush into the living room to see what the matter is, and they’re sitting in their chairs. Bob in his chair, Lois in hers. They’ve got these looks on their faces, like if they could only get up out of those chairs, they’d be at each other’s throats. Bob is muttering, and Lois says to me,

Margaret, tell this man that my dog went to Heaven.

I ask her, What are you talking about, Lois? And she tells me the story.

Back in the twenties—keep in mind, this is nearly a hundred years ago—Lois lived with her family in Glen Cove, Long Island. She was little Lois Rogers then, just a little girl. The family had this Irish Setter, a beautiful but stupid dog named Patrick. The dog used to get up at the crack of dawn and run around the neighborhood collecting the newspapers off of everyone’s front porch, bringing them back to the Rogers house. They would wake up and find a mountain of newspapers on their driveway. Everyone loved Patrick, as you can imagine.

In the neighborhood there was another dog, some kind of mutt. A meaner dog there never was—this dog used to beat up all the other dogs. So one hot summer afternoon, all the neighborhood dogs had had enough of this mean dog. They corner the dog in somebody’s garden shack, and get this—they kill the dog. Fluffy and Bowser and everybody else’s dog, a dozen of them or so, they’re in the shack ripping up this terrible mutt. Who knows where all the owners are during this? And the thing is, Patrick the Irish Setter was there. Somebody saw him running off, along with all the other pooches. Nobody knows what part he played in the killing. Maybe he just stood there, or maybe he was on the mutt’s neck, tearing him to pieces. Maybe Patrick was the killer.

Some time before Lois grew up and got married, Patrick left Long Island. Lois never saw him again. She says that he went to live on a big farm upstate, someplace big and spacious. I know exactly what this means, but I say nothing because evidently Lois believes this story about Patrick and the farm. Sometime, many years later, Lois heard that dear old Patrick had passed on. And that was it.

So now she wants to know, did her dog go to Heaven? She and Bob are arguing about this, and I’m thinking, God help me. Lois says, Of course Patrick’s in Heaven, because that’s where every animal goes. Bob thinks that Patrick was a murderer. Even if he didn’t kill the mutt personally, he was an accessory to murder simply for being present in the garden shack that day. Patrick didn’t stop the killing, did he?

Lois says—The killing was in self-defense. This vicious dog was terrorizing the neighborhood, and if the peaceful dogs of the community hadn’t banded together to deal with the problem, they would have been the dead dogs. Sometimes, Lois says, when your back’s to the wall—you have to take justice into your own hands.

They’re both looking at me, and evidently they expect me to settle this argument. Lois wears these inch-thick glasses, and she looks very sad and worried. I think back to my years at the girls’ academy, and I’ll be damned if I can remember what the nuns said about dog souls. I say, Well, Lois, it sounds like that mutt really had it coming to him. Whatever Patrick did to that dog, I think it was justified. But I can’t say for sure whether Patrick went to Heaven. I think the Church says that only people go to Heaven. My best guess, Lois, is that Patrick probably went to purgatory. But I don’t think he’s being punished—I mean, I wouldn’t think that dog purgatory would really be so bad.

Then Bob shouts out, Do you hear? Your dog is in eternal limbo!

Lois shrieks, and throws her hands in the air. She asks me, Do you hear this awful man? I never want to see this man again. Bob, get out of my house—we are getting a divorce!

Fine with me, Bob shouts. I laugh, and say to them, Bob, Lois, you can’t get a divorce—you’re not married. Lois looks confused for a second, and then she starts wagging her finger at me. Yes, she says, and now you can see why!

So I fix them each a drink, and get them their dinner. Normally I sit on the back porch and smoke while they’re eating, and then I clear the table. Tonight Lois invites me to dine with her and Bob. Or maybe I invited myself.

Anyway, we eat the shredded lamb together. We talk about the doughnuts at the Hole-in-One, the dune buggies that the kids are tearing up the beaches with, and other things. By the time dinner is over, Lois and Bob are yawning. They’ve forgotten about Patrick and his dog soul.

Then I get in my car to leave. It’s dark. I roll up to the front gate, and the deer are standing there. They’re blocking the road. I don’t know what got into me. I started honking the horn, going crazy, and the deer look at me like I’m an idiot. Finally, they move out of the way—but slowly, no hurry.

Calm down, I said to myself. For God’s sake, calm down. 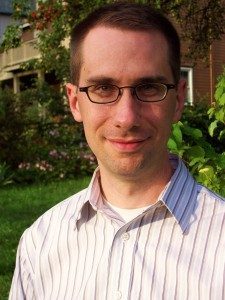 Tony Perkins is an investigator for a state agency that monitors political campaign finance and ethics-in-elections issues. He lives in Olympia, Washington with his wife and daughter. LIVING IN SIN is Tony’s first story to appear in a literary journal. Previously, his fiction appeared in HeartattaCk, a magazine catering to the international hardcore punk rock scene. In 2008, he published Like Everyone Else, a chapbook novella, through the City of Olympia’s HERE TODAY public art program.