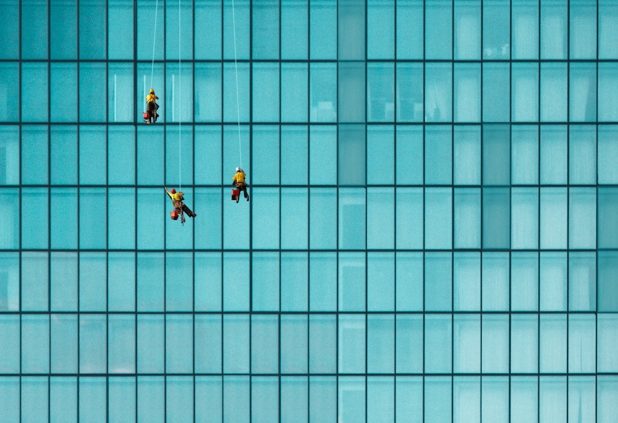 Every creative writer’s dream is to leave the day job and just write. No longer shackled by other responsibilities, deadlines, or inter-office politics, you could spend your days at home, or at a coffee shop, addressing your literary whims and dreams: all the ideas you could never get to, all the drafts that have been waiting for a rainy day. With the space and freedom of complete independence, answering to no one but yourself, you could become the New Yorker writer or best-selling author you always wanted to be.

In December 2009, after spending several years climbing down the corporate ladder, reducing my project management responsibilities and giving up the vice-president track in favor of reduced hours so I could spend more time writing, I finally left the company I’d been with for more than fifteen years to write a book.

I didn’t go into this decision as a novice. I had found some success publishing essays and articles in newspapers, magazines, and literary journals over many years, and my writing colleagues had told me it was time to step it up a notch.

My husband and I downgraded our standard of living so his salary (and some help from my mom) would cover our bills, and I gave myself a year to release my bottled-up literary tension—words and chapters begging to be set free. I did not think about money, employment, my future, or the world. I spent every waking hour on the book—writing, researching, traveling to conduct interviews and to visit libraries and archives, and thinking, above all; sometimes long afternoons of nothing but thought. In addition to two prior years of part-time writing, I finished the 250-page memoir/history manuscript, to my satisfaction at the time, after only ten months.

While I worked to find an agent and polish the book, and with the blessing of my husband, I decided I would continue the writing life into another year. I would work on my essays and articles again, with the luxury of no deadlines or responsibilities even to myself. Compared with writing while beholden to a company or clients, or even while working on the book, I would be prolific! I would be a free agent to explore the recesses of my mind for all that it wanted to say, with plenty of space for my brilliance to rush in.

I sat at the computer. I checked email, LinkedIn, and Facebook as regularly as I sashayed to the kitchen to make snacks. I carried baskets of dirty laundry down two flights of stairs to put loads in and then back up when they were clean. I folded my husband’s underwear and matched up his socks.

I scheduled home repairmen, made doctors’ appointments for my husband, and straightened up the house. I planned menus and went to the grocery store, and by the time four o’clock rolled around I began to get dinner ready so it would be on the table when my husband got home from a hard day at work. Sometimes I pulled weeds in the yard between stints at the computer or met a friend for lunch after yoga. I occasionally went clothes shopping, just for me.

I did this for weeks, months. During this time, I was Netflixing seasons one through four of Mad Men, plunging myself into the gender-stereotyped 1960s world of reckless, decadent Madison Avenue ad man Don Draper and his colleagues and their bored, unhappy, homebound housewives, and I began to feel like I was living a Betty Draper life.

I admit, I am exaggerating a bit. I had one magazine assignment in January of my new year, one in February, March, and May as well, and revisions for an article that was accepted the previous year—an excerpt from my book. I was teaching two creative writing classes in the evenings. I was serving as a thesis advisor for a graduate writing program, and I judged an essay contest for a literary festival. I was also doing fitness boot camp twice a week and swimming once a week. But the point is, I wasn’t making much money—a few hundred at a time—and I wasn’t doing much self-inspired writing. After liberating my one big idea, in the form of the book, I was empty.

All the complicated essay ideas I had hatched that required historical research, the one that necessitated finding a linguistic specialist, the other articles I had planned on the topic of my book: when I sat down to begin them, or even just to approach the idea of them, I no longer found the notions riveting. I no longer felt the undeniable urge to create, to explore, to discover. I had all the time in the world to follow any new creative strand, any inkling of an idea I might have, to dance with it, to lavish it with attention, and yet, I found myself devoid of curiosity. It was as if my ideas were an inert gas, diffusing in limitless wide open space, floating away into nothingness.

Evening after evening of watching the creative process at work at Mad Men’s Sterling Cooper agency, I began reminiscing about all I had left behind. My communications consulting firm outside of Washington, D.C. was no match for the glamour and high-powered adrenaline of television’s Manhattan agency, but the show reminded me over and over again of the motivation of daily and weekly deadlines, brainstorming with creative teams, being “on” for client meetings and presentations, working lunches and happy hours, dressing up and looking nice (and showering each day, for that matter), work that was not of my own making but that somehow made me feel useful and productive and valuable in the world, the ongoing calisthenics of the brain.

Despite the characters’ dysfunctional lives and flawed personalities, Mad Men inspired me. It made me want to wear ironed shirts and pleated pants and go to work for a company again. Watching the young, ambitious Peggy Olson in those early seasons of the show—rising from a secretary to a copywriter, fighting for a woman’s right to assume management responsibility and be respected as a creative visionary and a professional—I realized I had “had it all,” and I wanted some of it back. I had achieved what she was struggling for, and I had given it up because I thought it interfered with my writing. Don Draper, cad that he was, seemed a hero of sorts. However he got his inspiration—by drinking, or planting himself in his office overnight, or serial philandering—every time he was under pressure to deliver the right slogan or motto or creative concept to a client, he made it happen. Watching this real-life fiction on the tube made me realize that not only did I miss the professional life I had left behind for its inherent rhythm and orderliness and even its chaos but that I needed “real work” to make my literary writing happen.

In my old job in environmental communications consulting, we had used the term “forcing agent” in speaking about global climate change. “Forcing agents” are those phenomena that “force” change on the climate—natural happenings like changes in the amount of sunlight, or human-driven phenomena like increasing pollution from burning fossil fuels.

Instead of a forcing agent causing warming, droughts, floods, or disease, I needed one that would make me feel I had too little time to produce new work. I needed short deadlines. I needed conflicting priorities. I needed an opportunity I might miss—something to drive originality and inventiveness into gear, to make my art desperate, to make writing as necessary as breathing, like a gasp of fresh air after nearly drowning. I needed all the reasons why writing would not fit into my life in order to make it fit. Like a gas gaining density from being compressed into a small space, I needed to pressure the muse into action with small windows of time, little energy, and an occasional flicker of creative spark.

So I channeled my inner Don Draper—summoning up the poised, confident air, the polished dress, the startlingly pithy and suave one-liners (having watched the special feature, “How to Succeed in Business Don Draper Style”). I took an interview with a firm where I could be creative and productive and useful again, and I got another job (albeit, part-time—leaving an air leak for that compressed gas).

I did it partly for the money, of course—I wanted to be able to buy things again—and I did it partly for the self-esteem that comes from getting something tangible done each day: the campaign that needs a tagline, the project that needs a vision. I did it for more frequent affirmation of my abilities and ideas. And I did it to get out in the world and live, rather than staying home on a budget and imagine living.

But more than anything else, I did it to give myself a driver, a forcing agent—something that would tamp down on my available time, something that would squeeze me until I practically had no breath left, so that the creative juices that once flowed so freely without even trying, would begin to seep out onto the page once again.Running sport media | Air Jordan 1 Retro High OG “UNC Patent Leather” Obsidian/Blue Chill-White UK

Out on the Bendy Branches