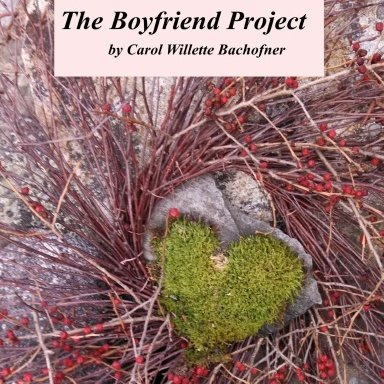 School dance, prom, holding hands, kissing, dating, love, and boyfriends. Full of reminiscent nostalgia for the past, Bachofner explores young love in her latest poetry book, The Boyfriend Project (2017). The catchy title attracts instant attention, especially from girls of all ages, who love to reminisce about romantic relationships from their youths, especially the early stages of blossoming teenage romance. The puppy kind of love.

Bachofner begins with wonder in the prologue, “Puppies and Stolen Things”:

about sweet boys from long ago.

On a list somewhere, or in an old diary,

turned over and over

on the beach. Some are gone, some

photos of these boys on her coverlet:

Do they think of her?”

Like playing an old album on a record player, it’s pretty obvious what kind of music it’ll be playing to the rest of the album on the record once the tune comes tinkling out.

Then Bachofner takes the reader on a journey of love talk from the very beginning of her youth. She begins the journey, the first poem after the prologue with a sense of innocence, as if she begins writing in a blank page. On the first poem, “It’s so innocent, isn’t it?”, Bachofner shows innocence and shy desire for romance.

“The kind of love, that first

or a glance or two on the bus,

in the gym, at the ballfields.”

But soon after that, Bachofner erases this innocence as she transitions to transformation of boys entering puberty in “No Boyfriends in Junior High”, a bluntly honest poem.

“By the 8th grade, all the boys

had matured into jerks.

They swaggered, leaned together

outside Cox’s Store, made dirty jokes

about every girl who walked by.”

The poem’s unapologetic tone is from a teenage girl’s perspective who departed from her childhood, as Bachofner shows the acts the boys were trying to do to prove that they were big boys now:

Between thumbs and forefingers,

Boosted from their father’s dop kits.

Sure enough, as Bachofner goes on, she begins blooming the teenage romance in “There Was the Year”

of learning to kiss,

a look to see if his eyes

into laughter at my dare.”

Her poetic free verse flows freely as she replays all of her memories on many moments in that one poem. It’s like flipping through a photo album that consisted of many photos over a decade, captured many moments in many seasons. She followed the teenage romance throughout. Especially on a mini poetry series, “Boy Time, with music and prayers” that consists several small poems that are chained to one and another with the written time on the the titles: “10 p.m. School Dance”, “11 p.m. Perkins Cove”, “12 a.m. Nobble”, “1 a.m. Parked”, “2 a.m. Old and New”, “3.30 a.m. Dance”, “4 a.m. Prom”, and “5.30 a.m. Out”. Bachofner creates a sequence of several small scenes that captures a precise moment at a certain time. Which builds up to the climactic moment when she’s finally settling down.

Because it’s a nostalgic themed poetry, Bachofner spends some time on on relishes in memories of long-ago lovers and/or crushes she had romantic encounter with, as she writes the dedication after the title of the poem: “High School Sweetheart — for DW”, “Cliff Walk — for Roger”, “Five Hundred Pictures — jor JSW”, and “Locket — for J”. In those poems, where it’s sappy and cheeky, shows the ultimate puppy love in teenage romance.

“Five hundred pictures of you,

After a journey of several falling in love and old boyfriends, Bachofner ends the book with an epilogue, “Love Actually”. Which, she dedicated to one person consistently. The readers might assume, she finally met the love of her life, as her poems within the epilogue showed the growth and maturity that ended her boyfriend project.

The reminiscence of love in all of her poems uncovers so many nostalgic feelings about teenage romance; a never-ending subject that can easily become cheesy and cliché. However, Bachofner boldly writes it down on the page, and shares it. by Lauren Lang
The Eight Graveyards