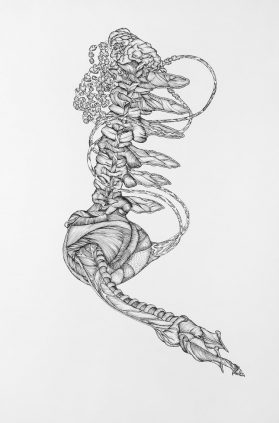 In this garden a draft of summer plays across the prayer flags.

A handful of slugs marched into the Worcestershire sauce and drowned themselves last night.

The red dog is tired and smells like dirt and air.

In this graveyard you ask her again to tell you how the moon moves.

In another you are taking the door knob apart.

In this graveyard there is no fruit that ruins all other fruit.

And in one garden you will come to find your name etched across a tomb.

In one graveyard your blood fixes all other blood.In another graveyard it’s not about you.

In this one you never hesitate because time is the garden of loss.

In a garden south of here women and men dance at the top of a mountain to release suffering, fireworks echo off of cliff and cave. In another garden the stampede of their feet crumbles the buildings they will build and no one will be able to stop the water from taking what it will.

In this garden you’ve never been confused by beauty, it has only ever reached deep inside of you, scoping out a watershed of dreams.

In one graveyard you wake up at 5 a.m. to the same ache every day. In another you’ve learned the only chaos you can limit is your own.

In one graveyard your life is coming back together. You find the boy you lost. He’s dewy as a lily in the rain. The other ghosts are with him. The police detective. The man with musical hands and a head full of sorrow. The dog with the pink heart across her nose. The woman with the dentures and the one who wore a wig—they still speak to you some nights. And the forever girl on the couch with the red hair and the crumpled pack of Pall Malls.

In another the dog that changed your life zooms around you until she is tired and stuffs her nose into your armpit, then you both go out and lie down in a baseball field and stare up at the dragonflies and the stars. And even though you know she is dead, you both remember that time the old lady tried to steal her, and you remember how she healed you.

In one graveyard no language is ever lost and no love is ever lost, only the two-way ladder of its limitations.

In one graveyard you are outside the helix of worry, a force field made of broken wings.

In another you know you shouldn’t, but you wish you never were.

In this garden there is as much cruelty in the earth as there is in the heart.

In this graveyard you worry about her lonely bones.

In this garden the owls are technicolor. Their song is picked up by the soft wind.

In this garden you never become attached to the poison.

In this graveyard you could watch the red dog breathe for days.

In this one the club is never carved, the fire never lit, the sharp stone never fastened to the edge of anything, and nothing ever hurtles through the air. In this graveyard no one ever died at the hands of a stranger holding a machine.

In this garden no one was ever forced onto any boat.

In this garden your brother listens when you tell him to be easy on himself. He sits under the tree, petals sprouting from his hands.

In this graveyard you take the glass of gin from the driver’s side cup holder and pour it into the ice capped snow before reaching for the phone.

In this graveyard your mother never spends her life trying to save a stranger and your father never walks the earth like a wounded bird.

In this graveyard you wonder at the symmetry of damage.

In this garden you trap and release the spiders, their spindle legs the saddest sticks you have ever seen.

In this garden the rose bush becomes a web and the red dog noses at the purple flowers.

In this garden the smell of garlic wakes you and the air is the same temperature as the ground.

In this garden the peacock is not the only magical animal, but there is the nimbus, and caldera, stalagmite, and the boy who cannot hide his dust.

In this garden the half moon is washed up on a cloud, a lover broken on a crescent shore.

In this garden parts of you go missing—your pinky that grows crooked after being broken, but more specifically the part of you afraid to show affection, and more generally the part that of you that laughs when you feel pain.

In this graveyard you remember the only way through is to locate joy inside the cave.

In this graveyard the sun loses contact with the earth.

And in this garden you discover darkness is just nothing, without the certainty of light. 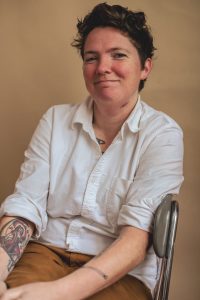 Anna Dunn is a food and crime fiction writer. She harbors a deep love for Bruce Springsteen, rescue dogs, and Murder She Wrote. Early on, her mother threw the television out when Anna let it slip that she aspired to be Magnum P.I. when she grew up. She served for a decade as editor of Diner Journal, an independent food and literature magazine, and co-authored DINNER AT THE LONG TABLE and SALTIE: A COOKBOOK. For at least twenty minutes every day, she is hard at work on her first crime fiction novel and/or concentrating on her breathing.

by Lauren...
Scroll to top