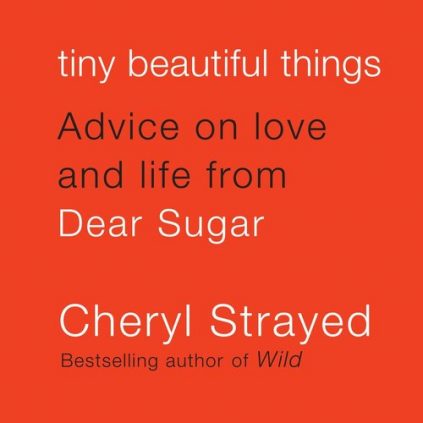 From Reading to Human:

On a sunburny afternoon in Prospect Park, I drank apple-ginger soda and talked about death with a man who boxed, followed the zodiac, and read palms. He sang a line from Sade’s song “Maureen” about losing her best friend, “You’ll never meet my new friends.” I told him that a good friend of mine had died of breast cancer. He must not have heard me.

We looked at each other for a moment—a long moment, or a short moment that felt long, perhaps because it was utterly absent of intrigue, perhaps because he got it wrong, perhaps because my friend Julia was dead and now he knew. The boxer’s apparently airy way of life—full of astrology and symbolism—both interested and concerned me. It also reminded me of Julia. Julia had told me that she would rather die young than allow a scalpel to slice into her chest. So she died young.

Warning him that I might cry, I read to the boxer/astrologer/palm reader from “Dear Sugar,” the advice column Cheryl Strayed writes for The Rumpus, something she did anonymously until February. The first time I read column #78, “The Obliterated Place,” written by a father whose twenty-two-year-old son was killed by a drunk driver, I did so with my feet on the couch, my knees bent, my chest curled over my laptop, the hood of my sweatshirt pulled over my head. I wailed.

The father, who called himself Living Dead Dad, couldn’t manage a letter, so he wrote a list. He said he was tormented by how he had reacted when his son told him he was gay. “[B]ut how can you not like girls?” he’d said. After the accident the Living Dead Dad can’t bear seeing his son’s former boyfriend with a new man. He asked Strayed, “How do I become human again?”

Strayed was twenty-two when her mother—who had left an abusive husband, raised her three children, and attended college in her forties—died from cancer.

It has been healing to me to accept in a very simple way that my mother’s life was forty-five years long, that there was nothing beyond that. There was only my expectation that there would be—my mother at eighty-nine, my mother at sixty-three, my mother at forty-six. Those things don’t exist. They never did.

My grief is tremendous but my love is bigger. So is yours. You’re not grieving your son’s death because his death was ugly and unfair. You’re grieving it because you loved him truly.

When I read Strayed’s letter aloud in the park, I realized why the death of my friend Julia had hit me like a wall: I loved her truly. A few months after she had discovered the tumor, we sat cross-legged on her living room floor. She looked at me and said, “I think you and I have been sitting like this for centuries.” I nodded my head and cried. When I came home from the park, I borrowed Strayed’s words and repeated them like a mantra: Julia’s life was thirty-three years long.

In August, I went to Barnes & Noble in Union Square for a reading of tiny beautiful things, a collection of Dear Sugar pieces. Initially, her words felt rehearsed and corporate, though Strayed broke through the fourth wall with her charm and honesty. When I walked up to her afterward, Strayed said, “I know you. Why do I know you?”

I mentioned the reading she gave in March, when I nestled myself into the crowd at Housing Works for the launch of her memoir, Wild: From Lost to Found on the Pacific Crest Trail. With a live band and a slew of her writer friends reading Dear Sugar excerpts prior to Strayed reading from Wild, it was a raucous celebration. As she did for everyone else who stood in line, she had signed my book, “With wild best wishes on the journey.”

At Barnes & Noble, I had a moment to tell Strayed about my friend Julia. She held my hand and said, “I’m sorry.” In my copy of tiny beautiful things she wrote, “Take the balloon,” which I knew from “Dear Sugar” was a reference to a day in her twenties when she was coming off heroin and a young girl handed her a balloon she didn’t know how to accept.

While no child offered me a balloon in my twenties, what I hear in this directive is “rise.” When I saw Julia a month before she died, she gave me a favorite dress of hers—black cotton interspersed with bands of crochet. Maybe it’s time to wear it again. Sideways Review: We Are Not Alone

Sideways Review: The Center of the Labyrinth by Linda Goldstein