Blog - Latest News
You are here: Home / Book Reviews / Sideways Review: The Center of the Labyrinth by Linda Goldstein 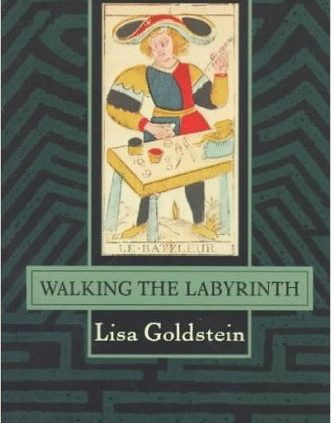 Lately I’ve been seeing my writing life as a labyrinth. The twists and turns it takes are even more dramatic than I expected, and believe me, I did expect drama. But more and more often, the dark parts of my particular labyrinth have been harder to illuminate, and the bright spots have been harder to find.

Walking the Labyrinth by Lisa Goldstein is one of those novels that I reread every now and again. I don’t know what calls me to it or why I decide to revisit it when I do, but I do know what I love when I get there.

I love the names of the characters. Neesa. Callan. Thorne. Fentrice. Corrig. Perfect for a traveling troupe of magicians.

I love that their last name is Allalie, which breaks down into all a lie.

I love Callan’s question for everyone in almost every situation: “What have you learned?”

I love that everything, absolutely everything, is based on illusion and trickery. That no one knows where illusion stops and reality starts.

I love that heroine Molly says, “I learned that illusion is a way to truth.”

The labyrinth in the book is underground and a place so full of confusion and razzle-dazzle, dark and light, blood and gaiety, that no one, least of all Molly, can ever guess what will be found around the next corner. Like all labyrinths, it paints you in. It grabs you. It holds you fast. And you may never escape once you’ve entered. The longer you travel the maze, the more it seems to grow.

I have two books to my credit. Two published books, that is. I won’t talk about the other ones, the ones that are written but that lie on their backs in the lost-book box with nowhere to go. They’re in their own labyrinths, and none of us, not me or the books, know when—or even if—they’ll find the passageway that leads to the reward at the center.

The book that I recently finished has been rejected, and rejected again. It hesitates and stumbles as it tries to negotiate the maze of the publishing world. It keeps getting pushed back, back into scary passageways it thought it had left behind. It isn’t sure which corner to turn. Rewrite? Revise? Give up?

I look carefully at the new books coming out. Some of these books are Allalies—illusions that exist just long enough to fool, to cast a spell before they disappear into stage smoke. I also see, like light when I turn the right corner of the labyrinth, a brilliance so bright it practically blinds. These are the books with lyrical writing, multi-faceted characters, stories so original they take my breath away.

These lights make me examine my own writing with a magnifying glass, make me look at ways to improve. They show me that the group of writers I want to follow through the labyrinth are the ones who write to make a work shine, to make it sing, to make it something I would read again and again. I want to be behind these writers who will help me craft books that someone will love the way I love Lisa Goldstein’s. But even though I’m following them, I keep losing them; I keep walking around the wrong corner. Or maybe I’ve picked the right corner but just don’t know it yet. Illusion. It’s a complicated maze to walk some days, but it’s all I’ve got.

Callan Allalie would say, “What have you learned?”

I would say I’ve learned, and am still learning, about the dark paths in my own labyrinth. But I’m learning about the bright ones, too. 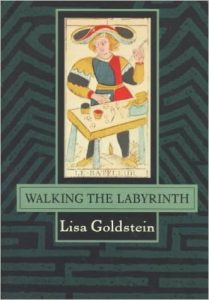