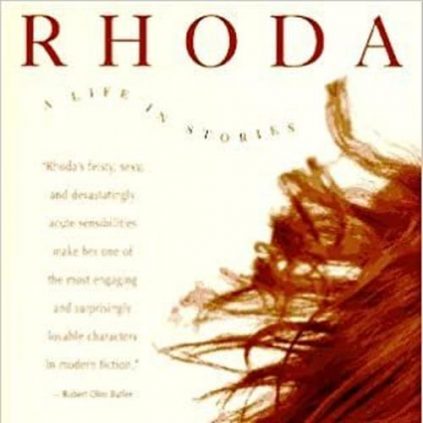 Natalie Serber on Ellen Gilchrist’s Rhoda, A Life in Stories

When I first fell in love with Rhoda K. Manning, I was in my early twenties and making a lot of bad decisions—failing classes at my community college; drinking Moscow Mules; dating waiters, surfers, a lawyer who sat next to me on a cross-country flight—and then beating myself up about my behavior. My life was chaotic and charged. In Rhoda K. Manning I found a kindred spirit who could blow it big time. She was fast, smart, took up all the air in the room, and would never take no for an answer. She had brothers to compete with and a rich daddy who always had her back. She was thrilling and brave and alive, even at eight years old in “The Tree Fort.”

In five years darker blood would pour out from in between my legs and all things would be changed. For now, I was pure energy, clear light, morally neutral, soft and violent and almost perfect. I had two good eyes and two good ears and two arms and two legs. If bugs got inside of me, my blood boiled and ate them up. If I cut myself, my blood rushed in and sewed me back together. If a tooth fell out, another one came in. The sunlight fell between the branches of the trees. It was Saturday. I had nothing to do and nowhere to go and I didn’t have to do a thing I didn’t want to do and it would be a long time before things darkened and turned to night.

I wanted her power, her confidence. At the very least I wanted to stop the self-flagellation, to own my choices in the way Rhoda did. In one story, “Music,” her father takes Rhoda to the hill towns of Kentucky, to show her his mines, to introduce her to the people he claims are the “salt of the earth.” His goal is to take her down a peg, to “make her stop smoking and acting like a movie star.” Of course his plans go awry, and Rhoda ends up seizing the day, commandeering a car and running off with a pool hall boy whom she has just met. A boy who takes her into the forest and makes love to her. At this point in the story, Ellen Gilchrist switches point of view; she brings us into the mind of the boy.

He was tired of her talking then and reached for her and pulled her into his arms, paying no attention to her small resistances, until finally she was stretched out under him on the earth and he moved the dress from her breasts and held them in his hands. He could smell the wild smell of her craziness and after a while he took the dress off and the soft white cotton underpants and touched her over and over again….

Here was every possible tree, hickory and white oak and redwood and sumac and maple, all in thick foliage now, and he made love to her with great tenderness, forgetting he had set out to fuck the boss’s daughter, and he kept on making love to her.

I had to put the book down. I loved Gilchrist’s language, her deep ties to the natural world, the things her characters said, the mistakes they made with abandon and without judgment. Gilchrist moved from one person’s thought to another’s as if she were the boss of the universe. You see, not only did Rhoda K. Manning reveal my passions and desires, my yearnings and missteps, she reveled in them. Gilchrist made them glorious. I adored Ellen and Rhoda.

Around this time in my life I began to harbor serious yearnings to be a writer. I wanted to create characters and move them about in a world of my imagining. I wanted to make discoveries and to touch readers in the way Gilchrist’s work touched me, by making me feel less alone. That Gilchrist published her first collection at the age of forty-six also warmed my heart; it was liberating to know that one could grow-up, live, raise a family, and then step fully into a career.

And so, twenty years later, it was with delight and worry that I picked up her collection, Rhoda, A Life in Stories. I was concerned that the stories wouldn’t speak to me in the same way they had so long ago. Now my children are grown, and when I read of young Rhoda’s wildness, it is with joy, yes, but also with the trepidation of a parent, worrying over my children’s mistakes and bad choices. The stories from her middle life—the ones I read with the cool head of a cultural anthropologist when I was in my twenties—I now steamed through, nodding all the way. In the story, “Going to Join the Poets,” Rhoda is pursuing her MFA in Arkansas. She is still impulsive, self-centered, and generous, but with new glimmers of insight. She is less heat and movement and more restless contemplation. At a surprising moment in the story, agile Gilchrist does a high-wire trick with time, flashing the narrative forward, giving the narrator a moment of retrospective wisdom, keying us in to the Rhoda still to come.

At that time Rhoda always kept her word. Any promise, even if she made it when she was drunk, was treated as a sacred bond. She had not learned yet how to stop people from manipulating her, had not learned how to say, I reserve the right to change my mind. I will take back promises you curry from me in moments of weakness. She was many years away from that sort of wisdom.

Self-knowledge is cumulative. As her life unfolds, Rhoda becomes a creature of the mind, less of the body, and she remains fascinating. In the long story, “Mexico,” we find Rhoda has become a poet. Drawn to the brutality and grace of a bullfight, to the blood and death and capes and swords, she grasps at the theatre of it. She wants to sleep with the bullfighter but ultimately acquiesces and allows her brother to talk her out of pursuing the toreador.

‘It’s about death,’ Rhoda said. ‘I can’t stand to do nothing constantly but displacement activities, amusements, ways to pass the time, until we get into the ground to stay. What’s happening to us? We are getting so old. We haven’t got enough sense to be alive and it’s almost over. We’ll be crippling around with a pacemaker soon. We’ll be completely dried out and ruined and I’ve never slept with a bullfighter in my life and I’ve always wanted to.’

‘Stop and get her a margarita,’ Dudley said.

Rhoda will not go gently into that good night. She complains about the flesh of her legs. “I just fucking hate growing old.” Later in the same story, her brother takes her to a ranch where, in cages and behind flimsy fences, there are lions, tigers, panthers. They have little to no interest in the humans, and yet Rhoda can feel the pent-up rage, the same rage she acted upon in her youth and the same pulsing anger she contained in middle life. The agitation and energy of the cats upset and frighten Rhoda. She tries to flee but stumbles and breaks her ankle. We can’t escape the loss of our power, our youth, and our beauty. We can only grumble, drink margaritas and hobble along, as Rhoda does, in her cast. She says at the close of the story, “Every now and then someone grows up, she decided. I’ve heard about it. Why not, or else, whatever.”

Why not, or else, whatever.

Natalie Serber is the author of the story collection, Shout Her Lovely Name (Houghton Mifflin Harcourt, 2012). She is the recipient of the Tobias Wolff Award, H.E. Francis Award, John Steinbeck Award, and a finalist mention for the Annie Dillard Creative Nonfiction Award. Natalie always seeks rapport with characters—fictional and real. To that end, she is currently working on a novel.

Rhoda, A Life in Stories
Ellen Gilchrist
Back Bay Books
1995 Read A Sideways Review of “Shout Her Lovely Name”