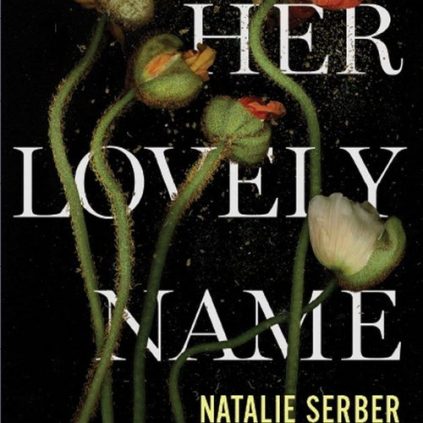 .
Here’s a confession: For many months now, I haven’t wanted to read story collections. Each time I paused in front of my waiting-to-be-read stacks, the story collections would jump up and down, screaming it was their turn, while the novels did nothing but lie there. And yet, a novel I chose. I agreed to write this review before my unprecedented anti-story syndrome became obvious to me. But a commitment is a commitment.

Uh-oh, you might be thinking, and I was too. But about halfway through Natalie Serber’s Shout Her Lovely Name, I had that comfortable feeling of having returned home after a long absence. These stories reminded me of others. But which others?

First the basics. Shout Her Lovely Name, a debut collection of eleven stories (including the title story originally published here at Hunger Mountain), is organized as follows:

I have to tell you, I fell into the lives of these characters fast and hungry—the same way I fall into a novel. Not that these stories read like micro-novels in the way that Alice Munro stories often cover wide expanses of time. Instead, from the opening sentences of a story, I felt as immersed in the life of a character as if someone had torn out eighteen pages from the middle of a novel and passed them over to me. As if the beginning and end of the story were elsewhere.

Let’s take a look at some of these in medias res openings, all from the first or only story about a character:

“Ruby Jewel”
When she stepped off the train, her father honked from the Dodge, three sharp blasts, like elbow jabs to her ribs. His thick arm dangled out the window, the sleeve rolled up, exposing sunburned skin.

“This Is So Not Me”
I was climbing the stairs to Walter’s brownstone, Ezekiel swaddled up tight like they showed me three times before I left the maternity ward. You know, how they’re supposed to feel better if their arms and legs are wadded in close like the Baby Jesus lying in the manger. Seems it would make me want to scream, but whatever.

“Developmental Blah Blah”
Mini cupcakes—iced, sprinkled, and dressed in ruffled paper wrappers—lined the pastry case like a jolly marching band. Cassie leaned forward to peer in at all the tiny perfection. “I don’t know…He’s going to be fifty.”

Now let’s take a look at some of the endings, all from the last or only story about a character, and all of which, it seems to me, could also work as beginnings:

“Free to a Good Home”
She and Nora didn’t have a TV so they never saw Marco’s commercial. He didn’t come to see them either, in their new apartment. Ruby knew he’d returned to Florida. He must have set all the furniture back on the sidewalk. The sofa, the spool; she couldn’t imagine anyone wanting to live with that junk.

“Rate My Life”
In the parking lot seagulls scavenged near a tipped trash can, stabbing at foil wrappers that glinted in the streetlight. Tonight Nora would eat tacos for her dinner and sleep beneath Aaron’s orange blanket. She shivered, knowing it would be cold. Tomorrow she and Aaron would say goodbye. Nora would bomb her final. Tomorrow she would call Ruby and listen as her mother described the amazing friends she’d met at camp. Tomorrow when she finally saw Thad, she would be unforgivable.

“Developmental Blah Blah”
Cassie’s hand covered her mouth. Her ribs could barely contain the huge beating within. Her daughter caught her eye and for a moment the tightrope appeared, the two women stepping onto it, knowing everything about each other. Cassie’s swelling heart split wide and Edith mouthed something: I love you or fuck you, or both. All Cassie knew for certain was that Edith was everything.

On my shelves I have more books by Ellen Gilchrist than by any other author—twenty-three total (collections, novels, memoir; some of which I have both in hardback and paperback). After I finished Serber’s debut, I reread Gilchrist’s first book of fiction, In the Land of Dreamy Dreams (published in 1981) where we meet Rhoda and Nora Jane (career-long Gilchrist characters), among others.

Margaret Donovan Bauer, the author of The Fiction of Ellen Gilchrist, writes:

Gilchrist’s point of uniqueness is that all of her work is interrelated to the extent that her whole body of work—that which she has already published and probably that which she will publish—is part of an organic story cycle, a story cycle that continues to evolve as each new book appears, comparable to the roman-fleuve. It is a story cycle in the full sense of the word: there are no definite endings to the individual books and, distinguishing her work from the roman-fleuve, there is no clear beginning to the cycle.

In addition to the open beginnings and endings, both Gilchrist and Serber write with a slow richness to their prose—in the same way that maple syrup finds its way from the middle of a stack of pancakes to the plate. Both writers avoid concision in favor of an abundance of life details. Sentences that open out and meander. Lots of voice. And these two share a practical tone. But Serber’s tone two-steps forward, while Gilchrist’s cuts sharp. Serber’s characters seem to have all the time in the world, while Gilchrist’s seem impatient, often making spur-of-the-moment decisions. Serber’s fiction focuses on mothers and children, while Gilchrist’s fiction focuses on women.

The writer Yiyun Li, whose stories often speak to those of William Trevor, said in an interview, “I believe a writer writes to talk to his/her masters and literary heroes…. [A] story can talk to another story in many ways—a line, a character, a few details, or sometimes it is the mood of the story, the pacing and the music of the story….” Natalie Serber’s stories speak to those of Ellen Gilchrist while at the same time being one hundred percent Natalie Serber stories. How exciting it is to anticipate the possibility of more stories about Ruby, Nora (a Gilchrist character name), Shelby (another Gilchrist character name), and Cassie—characters who from these beginnings have so much behind them and from these endings, so much ahead of them. Sideways Review: We Are Not Alone

by John Proctor
Scroll to top