The Cultural Wellsprings of Storytelling

—from The Demon Slayers and Other Stories: Bengali Folktales by Sayantani DasGupta and Shamita Das DasGupta

Gather ‘round, children, and I will tell you a story.

It is a familiar scene. The storyteller is a village elder, or a grandmother, or a wandering minstrel. The passel of eager-eyed children, and perhaps some adults, sit close. It is the still evening, under the fluttering mosquito-net; or perhaps mid-day, in the shade of an old acacia tree; or a darkening and cold afternoon, by the light of a roaring fire.

The stories too are familiar: princely quests, cautionary tales of greedy merchants, creation myths of how humans came to be, or explanatory stories of why the tortoise has such a hard a shell. They tell of djinn and rakshas, orphans and angels, cunning foxes, and wise spiders.

Yet, while they share these commonalities, each such “stream of stories” (to borrow a phrase from Salman Rushdie) is sprung from a culturally specific source, and each teaches us something particular about that community, culture, and history. The sweet waters from Bengali, Hebrew, Finnish, Mandarin, or Igbo stories might all quench a listener’s thirst, but in fact, they each taste a little different.

Take, for instance, a story my father told me when I was young to help me understand the death of a family member. Although, like many such tales from many different cultures, this story helps explain death, it is based on the Hindu Upanishads and is consistent with a religious tradition of reincarnation. This story could not belong to a culture that believes in heaven and hell, or the permanent connection of one unique body to one unique soul. While it holds truths for any reader, it also teaches us specifically about the beliefs of a particular region of the world and a particular people from that region.

The story itself went like this: You must imagine life’s energy as a mighty river, my father said to me. Those flowing waters represent all the souls of all the creatures in all the universes. Our bodies, he explained, are mere vessels holding that precious soul-water for a limited amount of time. Like clay vessels, our bodies are impermanent. When we die, it is simply a process of pouring our vessel’s liquid back into the eternal streams of life. Thereafter, our individual, personal life force may be indistinguishable from the rest of the rushing river, but it never disappears. It simply returns to its original source.

I like to imagine storytelling as a somewhat similar process—of dipping one’s drinking gourd into the eternal stream of stories. The storyteller gives the tale shape and form, but the essential life force comes from somewhere else entirely. Rushdie plays with this image in his delightful Haroun and the Sea of Stories, a novel in which the evil fascist characters, the chup-wallahs, want nothing more than to dry up the world’s story waters. Or as the mystical Persian poet Rumi wrote in a poem called “Story Water”: “A story is like water/That you heat for your bath./It takes messages between the fire and your skin. It lets them meet,/and it cleans you!”

From Salman Rushdie to Jeanette Winterson, from Toni Morrison to Naguib Mafouz, some of the greatest authors of modern-day adult fiction have written stories based on culturally specific folktales and mythologies. In telling their tales, these authors keep alive these old stories while giving them modern day resonance and relevance.

In recent children’s fiction too, the practice of explicitly drawing from old stories has informed the work of authors from Newberry Winner Grace Lin in Where the Mountain Meets the Moon to Michael Buckley in his Sisters Grimm series and Rick Riordan in his Percy Jackson and Kane Chronicles books.

In my own work, I have been revisiting the folktales of West Bengal, India. These stories of demonic rakshas and brave princes, flying horses, and evil snake-creatures were often told to me by my grandmothers during my long summer vacations to Kolkata. They were a bridge that connected me, an immigrant daughter living in the U.S., with my own history and family. In the same way that learning to speak, read and write my mother-tongue gave me access to Bengali culture, custom, and community, regional folktales allowed me entre into a distinctly Bengali imagination. Just as American children recognize the cackle of a Halloween witch, what Bengali child hasn’t shivered with delight at the Haau! Maau! Khaau! of a carnivorous rakshas on the trail of a human meal?

—from The Demon Slayers and Other Stories: Bengali Folktales

But this process of writing from folktales has not been without tensions. After publishing a more straightforward retelling of many such tales in a volume called The Demon Slayers and Other Stories (including stories from the well known Bengali collection Thakumar Jhuli—“Grandmother’s Satchel”), I had twinges of guilt at playing “fast and loose” with these ancient stories. Was it disrespectful to the tradition of my grandmothers, I wondered, if I paired the heroine of one story with the heroes of another? What if I inserted adventures from a number of different folktales, poems, and regional children’s stories? Or what if, on top of all that, I threw in a modern-day immigrant sensibility and an East Coast U.S. sense of humor?

I was able to finish that middle grade adventure without too much difficulty, however, because I knew that folktales, by their very nature as oral tradition, are dynamic and changing. One grandmother’s retelling of any particular story is often vastly different from another’s, just as one translated collection’s version might be different from another translation. So I wasn’t doing anything that generations of foremothers hadn’t done before me, I told myself. I was remaining true to the heart of these folk stories while modernizing them and adjusting them to fit the ears and expectations of my audience.

When I began a YA retelling of the great Indian epic The Mahabharata, however, I had even more significant qualms. I knew that there exist many different interpretations of The Mahabharata’s stories, and yet, what I was doing was borrowing from the great epic while weaving in entire characters, storylines and plot points of my own imagining. I was even more uncomfortable with the notion of writing the Hindu god and goddess characters that litter the story’s pages. In giving Indra form or writing Krishna’s dialogue, I was potentially stepping on the toes of an entire subcontinent of people who continue to actively engage with and worship these deities. As opposed to Greek or Egyptian gods like Zeus or Osiris, Hindu gods and goddesses are alive and well in the hearts of millions of people around the world. Was it OK, I wondered, to submit well-known epic storylines and currently worshipped deities to my quirky sensibility and overactive imagination?

Luckily, Hinduism itself came to my rescue. More a lifestyle and philosophy than mere religion, Hinduism has always welcomed contradiction, ambiguity, and more than a little irreverence. Gods walk among people, and the mystical and mundane mix freely and regularly in the lives of believers. (I had a great-aunt who prayed to Krishna to find her glasses and keys when she mislaid them—I’m pretty sure he rolled his eyes every time, but he still never let her down.) In addition, I was set free to a great extent by the idea of reincarnation itself. Rather than setting my re-imagined telling of The Mahabharata in the past, I chose to place it in a distant, post-industrial, agrarian future when, I imagined, the epic tale might have already taken place numerous times. My protagonist—a character who dies an unfortunate death in the original story—struggles in my novel to take his own destiny in his hands. In fact, in searching for a way to feel comfortable with my retelling, I discovered the heart of my narrator’s quest: Could he find the power to challenge the dictums of fate? Was this lifetime the one in which he would finally figure out how to change his destiny and save his own life? Not only did the idea appeal—what teen hasn’t sought to make his own way in the world?—but it emboldened me to tackle this beloved and cultural important epic.

In my “day job” as a faculty member in the Program in Narrative Medicine at Columbia University, I often remind my students that stories were the first medicine. Storytelling is the way we human beings relate to ourselves and the world around us; the way our families and communities weave threads of interconnection; the way societies and cultures ask the big questions and begin to make meaning from life’s mysteries, including illness, death, suffering, birth, and redemption.

In my work as a writer and teacher of fiction writing, I know that any story I can tell is one that has already been told—perhaps in a slightly different form, yes, but told nonetheless. In dipping into my personal cultural myths and folktales, I seek to pay homage with my words and images to those great storytellers who came before me. In so doing, I hope to celebrate personal cultural traditions while contributing perhaps otherwise unheard stories to the lexicon of an ever shrinking, globalized world. I also acknowledge and celebrate that which remains mystical and mysterious, even in the most skillful of storytelling. In the words of Rumi, “Water, stories, the body,/all the things we do, are mediums/that hide and show what’s hidden/Study them,/and enjoy this being washed/with a secret we sometimes know,/and then not.”

I end my thoughts here with the rhyme that traditionally completes every Bengali folktale: a poem that speaks to the universal values of environmental and familial interdependence, as well as the culturally specific notion of dharma—of each creature, whether big or small, fulfilling her duty and destiny. So the ant must bite, just as the writer must write.

My tale has now been said
the nauté greens are dead

Why did you die oh nauté leaf?
Because the cows did graze
Why did you graze oh wan’dring cow?
The herder gives no hay
Why won’t you feed the cows, oh boy?
My wife will cook no rice
Why won’t you cook some rice, dear bride?
My baby he does wail
Why do you cry, oh little one?
The sting of ants does pain
Why do you bite oh tiny ant?
‘Cause it’s only right!

Ku-toosh, ku-toosh, I will bite
Then hide away, out of sight.

—from The Demon Slayers and Other Stories: Bengali Folktales

With that ku-toosh, ku-toosh, we are done, though the story-telling has just begun… 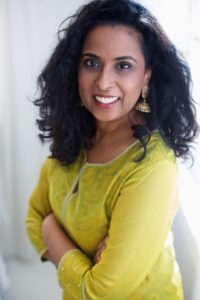 Sayantani DasGupta is the New York Times bestselling author of the critically acclaimed, Bengali folktale and string theory-inspired KIRANMALA AND THE KINGDOM BEYOND books, the first of which—THE SERPENT’S SECRET—was a Bank Street Best Book of the Year, a Booklist Best Middle Grade Novel of the 21st Century, and an EB White Read Aloud Honor Book. Sayantani is a pediatrician by training, but now teaches at Columbia University. When she’s not writing or reading, Sayantani spends time watching cooking shows with her trilingual children and protecting her black Labrador retriever Khushi from the many things that scare him, including plastic bags.