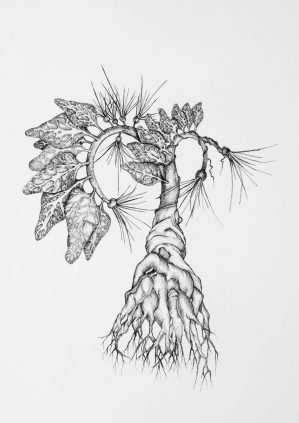 My spine is strung together by a string
of shattered stars. Neck wrung, I’m a dead swan
floating in a moat—an amusement park ride,

the fairgrounds abandoned. A stork stands in her nest
atop the Ferris wheel, the emerald cascade of kudzu like
a shawl for the steel skeleton, I stood at the stove

in my kitchen wearing thick wool slippers
because it was winter again—gray and white yarn,
chevrons—I stirred the soup before I spit into the pot

just to watch the feathers rise up to the surface.

When I was a girl my mother read me the same fairytale again
and again about another girl, only she had six brothers while I had none;
when a witch turned all the brothers into birds I didn’t need to worry.

“We’re all a little bit broken,” my mother said.

Lonely is one letter away from lovely,
and I was always an only child who liked to read
books in her closet because I knew how to be alone.

The shelves were a ladder the way vertebrae climb our bodies,
and I could crawl through the ceiling into the attic where I built a shrine: rose quartz,
bird’s nest, porcelain unicorn. To make a crescendo, you need both the climax and the crash.

Later I’d splash around in my own blood—
I’d fallen for the leather jacket, the blue mohawk, and the lyrics:
I’ll be back in the summertime with a handful of flowers and a bottle of cheap wine.

But something went wrong with the magic

and his wings turned into fists. One night, I crawled
into the backyard on all fours like a dog.
Under the spotlight moon, I dug the hole with my hands,

I cut the cord with my teeth,
and I buried the blue baby in the black dirt
beneath the white snow.

When she came back she never cried, which helped.
Instead, she pulled her wagon around the yard—circles inside circles,
the red Radio Flyer carried all my thrift store swans:

the porcelain ones designed to hold a storm of cotton ball clouds, and

the brass planters where old ladies once tended to African violets,
the patina green the way I’m now more rust than bone. Every day, I curve
more and more forward, my body becoming a question mark.

Mama, we are more than just a little bit broken. In another kitchen, I mixed
you with mica from the mountains and baked you in the oven until you sparkled,
but the soup was ready so I had to call my daughter in again. When I said,

“Close the door,” I didn’t think enough about how each time
she was closing out another day—sand through glass,
glass through sand, she’d sit at the table, holding her spoon

while I cracked an egg into the broth, the yolk a sun from the other side. 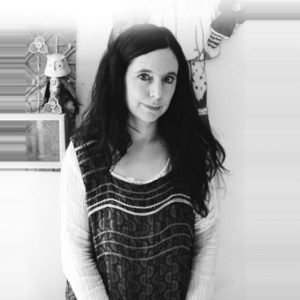 Sarah Elizabeth Schantz lives on the outskirts of Boulder, Colorado in an old farmhouse where she is surrounded by open sky and century-old cottonwoods. Her first novel, FIG, debuted from Simon & Schuster in 2015. While she is currently working on her second novel, ROADSIDE ALTARS, at the encouragement of a beloved student, she is trying to write more poetry these days, including “SWAN SOUP.” Schantz teaches the craft at Front Range Community College and via her own private workshop series, (W)rites of Passage. She is also editor-in-chief at the new literary app, Zathom.com.

Michael Brosnan Feels Like One of the Lucky Ones: Poets in Conversation