To Dean Young’s New Heart, Which I Can Hear Beating On The Eastside

Some evenings, it’s the Tejano thump from a Chevy
Tricked-out, all lowdown & shit, slow slinking up

Our dead tree street, reverberating the 120 bpm
Into our thin-walled fifties bungalow. Other times

It fades in & out on autumn breezes from marching
Band practice at the neighborhood high school, bass

Drums pounding one & three, high snares rattling
As if primitive wind chimes made of baby bones.

But mostly, it pulses softly in the background –
The dull headache throb, the paper cut blood drip,

The great horned owl at midnight, his who-who-ing
Pumping inside my chest like a stranger’s organ.

It’s Getting Awfully Crowded Up In Here

I’ve been paying more & more attention to all the voices
Inside my head – the Swedish chef Muppet; Faulkner reading

Our rare snow days, his accent like a piece of dried cheddar
Stuck to the roof of the mouth; the greybearded deafmute

The back alley lisping hobo, scoring grass from college kids;
My creative writing teacher, a slash pine stump of a man, 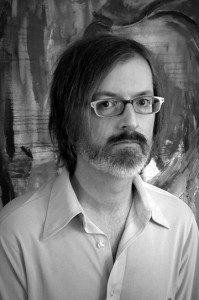 Harold Whit Williams is guitarist for the critically acclaimed rock band Cotton Mather. A session musician for numerous Austin artists over the years, his lo-fi studio projects DAILY WORKER, and the ambient home-recorded The French Riot, now have hours of music available online for download or streaming. A longtime UT Austin Libraries employee, Williams catalogs archived KUT music and writes a quarterly music review (Whit’s Picks) for TexLibris. Williams is also a 2018 Pushcart Prize nominee, recipient of the 2014 Mississippi Review Poetry Prize, as well as being author of four books of poetry. His collection, BACKMASKING, was winner of the 2013 Robert Phillips Poetry Chapbook Prize from Texas Review Press, and his latest, RED CLAY JOURNAL, is now available from FutureCycle Press. He lives in Austin, Texas.

A Toast to the Ancient Poet Li Po