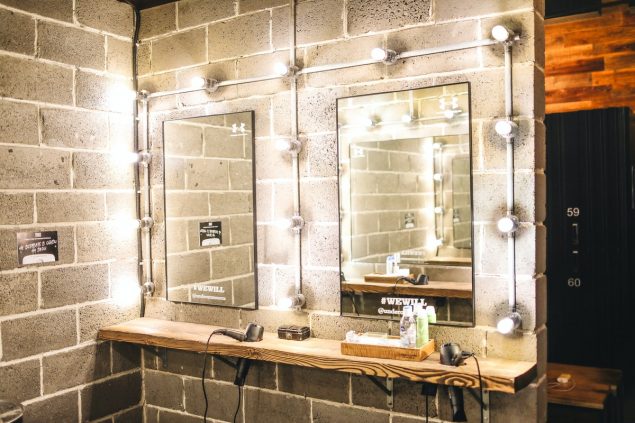 From 2002 to 2004, Evie Lovett photographed drag queens preparing backstage for the monthly drag show at the Rainbow Cattle Co. in Dummerston, Vermont. The exhibit has toured throughout the state of Vermont, with the last show at the Brattleboro Museum and Art Center from May to June 2015. Photos from this series were initially featured in the online MASCULINITY issue of Hunger Mountain, and now can be seen in the Poetry section.

Twelve years ago, I began taking photographs of local drag queens getting dressed backstage for the monthly drag show at the Rainbow Cattle Company, a gay bar in Dummerston, Vermont.

I was mesmerized by the process of transformation—layers of pantyhose pulled on, waists cinched, breasts created, eyeliner drawn, false eyelashes, wigs, jewels, nails. But it wasn’t all about taking pictures. I also loved being part of it. I was sucked into the world of attitude, banter, and camaraderie in that smoky basement room.

I couldn’t have imagined then the fun I’d have in the year and a half of photographing, or the friendships I’d form—nor that my journey with “the Ladies” would continue for over a decade, from Dummerston to Boston, New York, Phnom Penh, and a three-year tour of Vermont’s fourteen counties.

Backstage at the Rainbow Cattle Co. returns to Brattleboro for the final showing in the tour. The show sparked a month-long exploration of “Sex, Gender, Expression and the First Amendment” at Vermont Law School, a drag show, film screenings, numerous articles, and twelve public conversations.

Most viewers’ responses mirrored my gratitude at the performers’ willingness to share their backstage and backstories. Most were as captivated as I by exposure to the Ladies, who do what they love with exuberance and an attitude of “if you don’t like it, you’re missing out on fun.”

In the few cases of resistance to the work and subject matter, community members closed ranks to support the importance of freedom of expression and the role of art in enabling us to imagine worlds and ideas beyond those we inhabit. Audience members in Rutland stood up to defend the show against a protest during a public talk. The small, Memphremagog Art Collective in Newport voted to dismiss a fellow member who prevented viewers from seeing the show.

What have I learned on this journey? What is the show about, really?

All I can speak about with authority is my own transformation. My time with the Ladies changed me. Their readiness to do what they love, be courageous and outrageous, and write their own life stories gives me the courage to do the same. Thanks to the Ladies, I commit to doing what I love, despite my fear of what others will think.

In the words of Mama: “Lighten up! It’s about having fun!”

I Am a White Horse