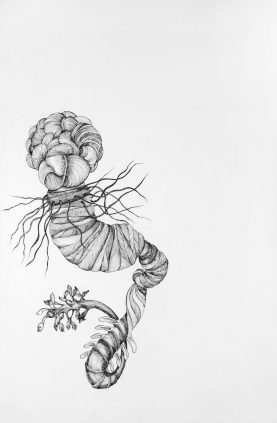 1. My husband and I don’t really celebrate Valentine’s Day. If we remember the date, we might splurge on chocolates or a nice meal at a restaurant (usually, breakfast or lunch because dinner reservations for that night must be made five months in advance, which neither of us remembers to do, plus it costs as much as the blood of a baby unicorn). If, however, Valentine’s Day falls on a weekend, we make the 75-minute drive to our nearest big city of Spokane, WA, from our current hometown of Moscow, ID. We check ourselves into a nice hotel downtown, the Spokane Club, which began its life in 1890 as a historic “gentlemen’s club.” The first such clubs were set up in 18th century Britain by upper class men and they were not accommodating in the least when it came to the gender, race, or social status of their members. Meaning, back when it opened its doors, neither my husband nor I would have been admitted inside Spokane Club on account of our race, and in my case, also because of my gender. Which is why, when we stroll through its august corridors, I imagine the ghosts of all those long-dead white men staring down at us from sepia photographs and oil paintings. “Look at those monsters,” I imagine them hissing, as they fume at our insolence, at our metaphorical middle fingers pointed toward them, at the loss of everything that was once good and pure and right.

2. The year I turned twenty, I wrote an article about Valentine’s Day. From my pulpit of recently gained adulthood and heightened righteousness, I called it silly and pointless. To my absolute delight, one of the biggest dailies in the country, The Pioneer, published it in their New Delhi edition. The morning it came out, I dutifully scanned it and emailed it to my then boyfriend, a PhD student at Ohio State University. He loved it and emailed me a dozen sappy e-cards. I bristled a tiny bit at the irony and my own hypocrisy, but I loved them all because at age twenty, that romance felt real and everlasting.

3. In India, Valentine’s Day wasn’t a thing when I was a kid. Sure, it was still the country of the Taj Mahal and the Kama Sutra, but in cinema as in real life, romance often assumed prudish forms. For example, in the Hindi films of the 1950s and ’60s, two flowers playfully smacking into one another meant, well, you know what. In later decades, seduction played out on the screen against the backdrop of heavy rains and a smoldering fire-pit in the room, forest, or barn, wherever the boy and girl happened to be. This fire-pit was everything. Either the boy and girl chased each other around it, or they danced facing it or the camera zoomed into the orange-red flames indicating that all manners of love were about to be consummated.

4. But the mid 1990’s changed it all. I was a teenager when India opened its doors to economic liberalization. Now we all wanted to be cooler and hipper, meaning… American. And that’s how Valentine’s Day entered our lives, and each year it grew a little bit bigger. The first casualties were the roses. They popped up, juicy, fat, and red, ready for sale at street corners and traffic lights, inside shiny new malls, outside multiplex theaters, and at the grocer’s next to the egg cartons. It was as if we’d let red roses take over our city and shame the other flowers to admit defeat and close in on themselves.

5. Or did it begin with the cards? In New Delhi, if your boyfriend didn’t buy you a card from Archie’s, the stationery and gift store with multiple locations all over the city, he didn’t love you enough. If the card was just regular-sized, he loved you just so. But, if it was five times the size of your head, he was going to love you forever.

6. There were also the balloons—lots and lots of them, red, upbeat, and always, heart-shaped.

7. In addition to the cards, the roses, and the balloons, what if your boyfriend also bought you a teddy bear? There was only one answer to this question. This man was a keeper.

8. Because Valentine’s Day was such a small thing to begin with, the first protests against it were also on a proportionate scale. They claimed such open displays of affection were evil Western imports that were destroying Indian values, specifically Hindu values, as if values are tangible like dry leaves on a fall day, rakeable and tossable into a fire. Today, however, in a country of more than one billion, these protests are neither small nor a laughing matter.

9. Most often, the protestors are saffron-robed men. Saffron, because it’s the color deemed sacred by Hindus. It pays homage to the sun and to Agni, the God of Fire. To a good Hindu, Fire is everything. It represents virtues such as honor and sacrifice. It marries us to our partners. It cremates us at the end. Its flames carry our prayers to the heavens. For the protestors, however, it aligns them to extremist, right-wing political parties.

9a. On the morning of February 14th, if they are mildly annoyed with life, they burn cards and tear down celebratory banners.

9b. If they are more peeved than that, they attack flower shops and trample meticulously arranged bouquets beneath their feet.

9c. If they haven’t slept well for a few nights in a row, they fan out in search of couples in public places. They accuse them of shaming the country, of dishonoring their respective families, parents, culture, community, and everything else in between.

9d. If they lead truly shitty lives themselves, they vandalize restaurants that seek to profit from this Day of National Shame (Special Valentine’s Day Dinner! Couples Get One Free Appetizer or Dessert of Their Choice!). They break windows and furniture, throw out celebrating couples, and sometimes carry out their threats of bodily harm.

10. Each year, I read about these protests. Each year, I wonder, how have these protestors lived until now without knowing about the Sun Temple of Konark? Built in the 13th century in the eastern corner of India, the Sun Temple is counted today as a World Heritage Site. But its antiquity alone does not make it unique. It’s what’s on its walls: detailed, lavish carvings of couples in passionate kisses, embraces, and more, inspired by the Kama Sutra, itself written in 2nd century India.

11. I wonder how these protestors claim to be “expert” Hindus without knowing about Kamadeva, Hinduism’s own God of Love? Like Cupid, Kamadeva too wields a bow. His is made of sugarcane and the string is composed of honeybees. His arrows are ornamented with five different kinds of flowers—Ashoka, blue lotus, white lotus, jasmine, and mango. He prefers the colors yellow and green, symbolic as they are of spring. When he strikes men and women with his special arrows, they have no option but to fall in love.

12. Back in Spokane, or Moscow, or anywhere else in America I happen to be on February 14, I hear about gifts and cards schoolchildren exchange inside classrooms. I see magazine covers promising life-changing wisdom, such as “33 Ways to Capture Your Man’s Heart and More.” I walk past store windows gloriously done up in pink and red, all trussed up for the occasion before they too must accept defeat, and fold in on themselves to make room for the green of St. Patrick’s Day.

13. But not once do I pause my celebrations (or the lack thereof) to worry about hapless threatened couples in India.

14. It is only the next morning, while reading The Times of India that I remember them, when I come across headlines such as “Fourteen Cities in India to Celebrate Valentine’s Day: Arranged from Least Safe to Most Safe.” I look at pictures of destroyed property, of massive bonfires devouring red-hearted cards, of angry mobs shouting slogans and holding up puny flags to save a three-thousand-year-old faith, as if it needs their saving. I see girls hiding their faces behind scarves to avoid being captured on camera, and the hunched shoulders of their boyfriends accepting what I assume is a mix of shame and resignation. I wonder why these girls and boys set out to celebrate Valentine’s Day in the first place? Why do they leave the security of their homes, knowing full well they are courting harassment and far worse? Do they do so to be modern Romeos and Juliets and celebrate love for love’s sake? Because they foolishly believe they will be allowed to be themselves in their own city and country? Or do they thrill in being monstrously insolent, in sticking metaphorical middle fingers to all those saffron-robed men lamenting the loss of everything that was once good and pure and right? 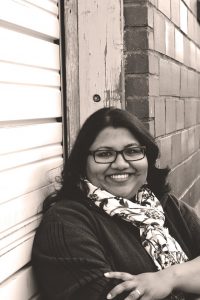 Sayantani Dasgupta is the author of FIRE GIRL: ESSAYS ON INDIA, AMERICA, & THE IN-BETWEEN (Two Sylvias Press, WA), and the chapbook THE HOUSE OF NAILS: MEMORIES OF A NEW DELHI CHILDHOOD (Red Bird Books, MN). She edits nonfiction for Crab Creek Review and teaches at the University of Idaho. Her essays and stories have appeared in The Rumpus, Phoebe, and Gulf Stream, among other magazines and literary journals. Honors include a Pushcart Prize Special Mention and a Centrum Fellowship.

Sayantani Dasgupta
For Folk’s Sake: In Brief with GennaRose Nethercott

The Waist That You Are From