Blog - Latest News
You are here: Home / Poetry / 13 Black Birds Looking at Away

1.
The first three rosaries that ever were were black black
for grief for beauty for burnt mustard seeds and what the smoke released.
Some say the threads snapped when God and Lucifer played tug-of-war,
best two out of three. Some say God never was. However
it happened, when the beads scattered with the sound of every Eve
clicking heels across marble-floored sanctuaries—a rush of wings.
Growth of eyesockets, of sharpened feet. Beads pupiled into eyes, moved
among the mountains. God said let there be beaks; Lucifer said
let something bleed. Black blackbirds, colored blackbirds, and black birds unrelated to
blackbirds sucked voices out of God’s three minds. If we knew how to listen we’d hear
God’s thoughts in their calls:

3.
A raven named Nevermore did not fly
out of the Plutonian night.

A raven named Never wanted more.
The raven and The Raven’s speaker
both wanted more Lenore.

4-12.
When Crow lived alone in the oak, Crow
was happy. For a crow.
Then 8 cars came with windows full of crows.
Former Town Crier Pluto Denn cried Crow
went crazy! Crow didn’t know each crow
came from loose electrons vibrating Crow
back out on equal-angled light waves. No, Crow
thought those other crows had to go so Crow
cracked windscreens, but every eye of every crow
kept moving. Poor Crow cried all 27 crowcries.
No magic. Every driver heard Crow
land on every roof of every car, and Crow
bent down to peck those upside-down crows
while drivers looked for their dead. Crow
didn’t care what Athena said. Crow
ripped rubber from wiperblades. Crow
left his third leg in the sun so Crow
made evening last all afternoon. Crow
found his nest removed. When Crow
whirled the three tenses together, when Crow
edged the circle of cars, cawing, when Crow
made man and woman one in Egypt, when Crow
stole sun, burnt feathers, made moon, and when Crow
flew from the southwest at sunset, the other crows
did all of these with Crow. But when Crow
flapped wings without flight, the other crows
and their cars crashed together. The other crows
broke apart like stars. Now Crow
could live alone in the oak, happy. For a crow.

13.
Blackbird wore sheep’s white cotton clothing
so they thought he was a wolf.
The boy who cried, cried. 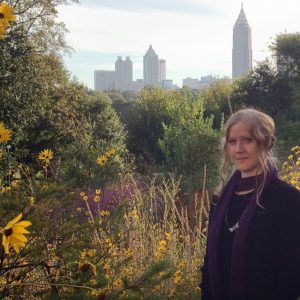 Jessica Melilli-Hand has published in Painted Bride Quarterly, Barrow Street, and The Minnesota Review, among others. She won first place in the Agnes Scott Poetry Competition in 2014, judged by Terrance Hayes.