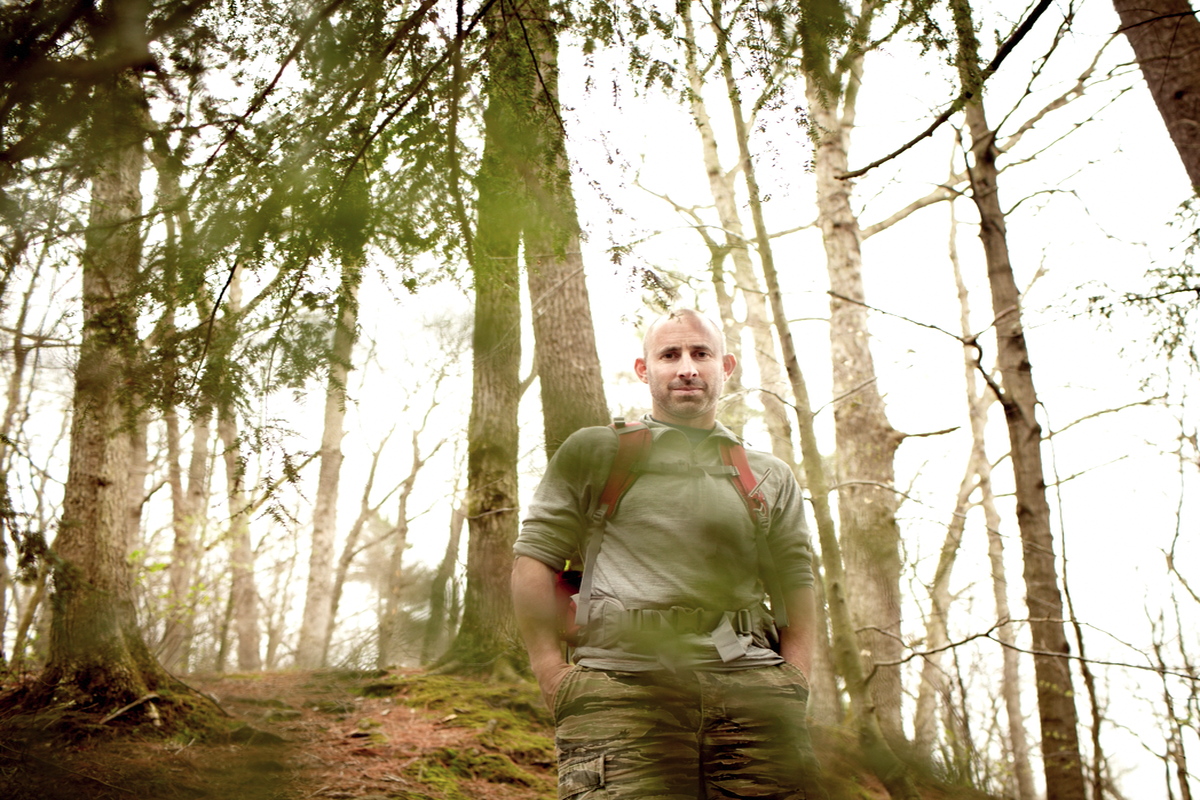 Sean apologized for his messy desk almost as soon as I walked into his office. He had multiple books spread out across his desk with notes scattered throughout. He is hoping to use all of his research to collaborate an Advanced Non-Fiction textbook for high level courses with Jessica Hendry Nelson and his desk had become the place where all his notes were kept together. I wasn’t surprised by his process because he often had more than one thing going on at a time (this is why he keeps multiple to-do lists both in his office and at home, so he doesn’t forget anything). This sheer organization is contrasted by the Chacos that he sported on his feet during class. His students love this. It makes him professional and relatable.

I was mesmerized by how Sean was able to juggle working at two universities, writing multiple manuscripts after the success of Finding Abbey, and spending time with his baby girl and wife at the lake. I figured there was no way he was sleeping at night, but it turns out his process is a lot different than I imagined.

Kayleigh Marinelli: I was wondering, since for Finding Abbey you did so much research and went on this whole journey, what the challenges were for you taking the adventure and translating it to the page.

Sean Prentiss: Well, I’m going to answer the exact opposite question to start out with. Alot of it was very easy because if I did talk to someone or do an interview, like we’re doing right now, I would have all this data right here that I could incorporate, or if I drove somewhere and looked at something I could write about it literally the next day. So, I’m not plumbing my memories from five years ago for the most part, I’m looking at something that occurred yesterday. That was the easy thing. The hard thing was you might write a chapter about say, a visit to Santa Fe, that is thirty or forty pages long and by the time the book is done, it’s eight pages long. It was not knowing what’s important until a lot later. You’re recording everything, compiling everything, organizing everything, writing everything, and then realizing “I can get rid of that, that, that, and that” and discovering what matters is one central question or driving idea. So, the easy part was having all this information and the hard part was knowing what was relevant, and the same goes with interviews. I wanted to sculpt it for the reader in a way that portrayed it as both honest and artistic. I could argue that I wasn’t being honest because I was focusing on the artistic, but I could also argue that you can get rid of the maneuvers and that’s what we do with dialogue, that’s what we do with scene and we have to do that.

KM: Speaking of relevance…before each of your chapters you have a quote, how did you decide which quote to put with which chapter?

SP: Goes back to that central idea, “what is this one chapter doing:” if I don’t know what the chapters doing, I don’t know what the quote is. So, I would write the chapter, revise the chapter, revise it seventy-five more times and then figure out how that chapter plays into the central question throughout and then find a quote for it. A lot of times it was the very last thing I was doing. Sometimes, say, I’m thinking of the David Peterson chapter, he is talking about his love for Abbey. I changed those quite a few times.

KM: What drew you to Edward Abbey in the first place?

SP: I’ve always loved reading, that’s how I came to reading: just a little kid, a little geek, just give me a book, and I loved to do that and I miss that. I don’t get to read for pleasure anymore, and it’s a travesty. I can’t wait to retire just so I can read a book a week, or maybe two books. But, about Abbey: I remember that when my best friend gave me the book, Desert Solitaire, it was the first time I have ever read an author who seemed like he fit into my world. I could envision him as a friend or as a mentor. He used the voice of people I knew. So rather than seeming like an artist way over there, he seemed like someone I could hang out with. He spoke about concerns that I didn’t know I had until I read him and I was like “yeah, yeah!” It was like running into a best friend and pretty quickly you just meet somewhere and say “you’re gonna be my best friend, I don’t know if you know this yet, but you are” and luckily for me Abbey was dead so he couldn’t say no. He was my best writerly friend and I would argue that he is what made me a writer.

KM: Were you always interested in writing non-fiction then, or did that come along later?

SP: I always kept a journal, at least from my freshman year of college on, and it was terrible writing: very much who, what, where, when and that was it, there was no “why” to it, there was no central question, no driving idea. I came to writing and journaling as a way of recording my life and, later on, understanding my life. I respect fiction, I’ve written it, published it, but it almost does nothing for me emotionally, psychologically. I find the most beautiful thing in life is finding the metaphors in the world around me, rather than inventing them because they are already there waiting to be lit on fire so people can see them. What drives me is essay, trying on new ideas, experimenting, and attempting to understand my life. I think it makes me healthier in ways that fiction doesn’t. I cannot do anything right now but write non-fiction.

KM: Staying with non-fiction then, since you are working on the collaboration with Jess Nelson, what are some tips you can give when working on a collaborative piece?

SP: I’ve worked on two collaborative pieces. I’ll talk about the one with Joe Wilkins, Environmental and Nature Writing: A Writer’s Guide and Anthology, because we completed it. Work with someone that you admire. Find someone who works harder than you, because you never want to be pushing anyone to do something. I love it when I’m motivated and inspired by someone else. We had a project and I completely trusted that Joe was gonna get his project done. There were times where I was behind schedule, or he was behind schedule, and I knew that was because of life and not because of work ethic. The other thing is that you want someone’s voice who you trust and someone who trusts your voice. I felt very comfortable writing a chapter, giving it to Joe, and saying “this is now your chapter, do whatever you want with it.” If we were going to delete something major, we would talk about it. I wanted Joe to add his voice to mine. Really trust each other, really know that each other is going to work hard, really admire each other’s voices and let those voices come together. It was easy. It was really easy. It makes the writing process quicker. It makes you smarter. Get someone who has different ideas than you. Those would be some of my ideas about collaboration.

KM: Between working at Norwich University and the Vermont College of Fine Arts, how do you find time to write?

SP: Writing is much bigger than typing. Writing begins with having a quiet moment in your life for an idea to bubble up. Writing is writing a rough, terrible first draft of a book, an essay, a story, a poem. It’s the revision process. It’s the workshop process. It’s the writer’s group process. It’s the proposal process. It’s the looking for journals and submitting, book contests and all that. It’s signing the contract. If I’m dealing with contract stuff I consider that my writing time for the day. I might not be touching a keyboard creating or revising but this is writing. Even reading. I need to do my research. I did an interview for a book club out in Colorado and that to me is writing time. I exploded what it meant to be a writer because I would hate it when I was promoting my book and not getting writing done. Now I’m realizing that promotion is part of the writing process. The other thing is, I try to write when other people are not. This morning at 4:30 I was getting work done, when most people are asleep. If I wake up, I’m going to try and get some sort of writing done. I always have my to-do lists. I have one right here, right here, and another one here, actually two more. If you go to my house I have a chalkboard with a to-do list. One on my desk. I guess what I’m trying to say is I’m nuts. I have a new baby at home, a wife I want to spend time with, a lake I want to be on every day. So, I figured out what needs to get done. Oh, I forgot to show you this to-do list! My online calendar. I try to keep things going. My dad always taught me that you have to work harder than everyone else and writing is not a competition, which is a complete lie because it is, but I don’t want it to be. If I’m not working hard, I’m not going to have success. My mom taught me that you have to have passion. I love writing. A bad day for me, well I don’t have bad days, but If I did it would be because I’m not doing what I love. I would rather be tired from not sleeping than to not do things. Does that give you some ideas? Announcing Our Guest Judges for the 2018 Hunger Mountain Literary Prizes...
Scroll to top