“You want to jump in the creek?” my mother asks. It’s a Tuesday night in late July and we’re on the porch drinking Myers’s rum doused with lemonade. She’s wearing cut-off cargo pants and a Grateful Dead T-shirt full of holes; her cracked toenails are the chartreuse of limes.

“No,” I say, to which she snorts and throws her cigarette butt into the wet grass, where it hisses before losing its flame. Mist rises from the field. Baby grasshoppers pop. Clouds drift.

I don’t want to go down to the creek with my mom. Nor do I want to be living here at sixteen in this deciduous/coniferous northeastern no-man’s-land of Vicksburg, where we were both born, forty square miles of intersecting roads, intersecting streams, failing farms, and rocky ledge. Populated by ghosts and animals and lonely women. Frickin’ heaven, my mom calls these woods.

Heaven: like she’d know. She’s thirty-three years old and pocked with life’s failures: her sun-lined face and cheaply tattooed arms and soot-lined lungs. My mother has cleaned houses, waitressed, logged, gardened, trained horses, hammered nails, groomed dogs, hung Sheetrock, and killed other people’s livestock for a living. It’s made her body crooked, wrinkled, callused, bent. But she’s a tiger, too. She has a tattoo of a mountain lion on her left thigh that reminds me, every time I see it, of the love-warrior inside her. The one who wanted something other than what she was born with, who nursed me until I was three (little titty-monkey), the one who lays her hand on my shoulder when I come home from class and says, “Angel, you be good. You be real good, baby-o.”

Angel? Your mother named you Angel?

What is it with us and our mothers? The way we both love and hate them. The way they define ugly and yet we catch their face in our mirror and surprise ourselves with—gladness.

The last mountain lion they saw in our state was in 1883. They shot it in the hills above our town, and now it’s stuffed in a museum in Boston, tawny eyes aglow. My mom tells me she’d like to steal that motherfucker someday. Free it from its goddamn stillness. She’s only one-sixteenth Abenaki but claims that cat as her spirit animal all the same. And so that tiger tattoo, inked across her bony thigh.

But tonight she’s talking about dogs. About how she thinks we should raise them to sell. For money. Always dreaming of money. Always in need of more. She gets up and pours us each another glass; coyotes yip down by the creek: a fresh kill. Her words drift to wolves. “Did I tell you about Alaska,” she says, taking a sip, handing me mine.

My mother and I have lived in this house, this hunting cabin on concrete blocks she stuffed with insulation, since before I was born. There’s a creek below, a field out front, a gravel road that runs straight for a while, and this porch. This porch. What is it about houses? The way their simplest elements contain who we are, say things for us. I was born on the living room couch, a mattress over a couple of crates. There was blood and my mom’s great-aunt Sugar with bundles of herbs and warm, thick hands.

She doesn’t wait for me to answer.

“Wolves,” she says, balancing her wide, bony foot in the air, touching the moon with its silhouette, laughing. “There were goddamn wolves in Alaska.”

She’s getting drunk, I can tell. I close my eyes and she disappears. I don’t want to be a pioneer. I am silently naming the places I might go: Chicago. New Orleans. Amarillo.

We’re waiting for the storm, which we can smell coming through the trees. We’re waiting for Robbie, her boyfriend with the bad teeth. We are, in some regards, waiting for dawn, or tomorrow, or next year. Leaves shuffle. Milky clouds stream past. The creek calls the water in the clouds home. My mom says it smells like desire and tips her head back, sniffing.

Desire. For a moment I know we both feel it: our shared loneliness. A deer steps into the far edge of the field—stick legs, dark pools of eyes—then turns away into the gray trees.

Objective correlative. I learned about it in my course on twentieth-century American literature. The way we anthropomorphize the world around us. I read Faulkner and Hemingway and Eudora Welty, books by frickin’ dead white folks, my mother said at the time, reaching for her Pall Malls.

Yes, I didn’t say, eyeing the bitter streak of her cancer stick, but those books are beautiful. They make me think of nights like this, on the porch, clouds and crickets and this blue hunger, only they turned it into something other. Took it off the porch and into the air. They got the fuck out of Dodge, those men and those women. An aunt of mine lives alone in West Texas. Another on a mountain north of here. Is this hereditary? Some kind of messed-up, errant gene?

But back to the here, the now.

“Fuck, it’s hot. Just a quick dip, Angel-love?” my mother whispers hoarsely, opening her eyes for an instant before closing them again.

Someday I’ll talk about this porch. I’ll tell a story about Sue, my mom, weeping or yelling amidst the blackberry canes and fireflies, the wild roses. About the way she drags the TV out here sometimes late at night to watch scenes from the Iraq War: the explosion of far-off bombs, the sad companionship of the box’s blue flicker. About how she throws shit at the screen every time George W. Bush’s face appears, whispering Motherfucker. Or maybe I’ll just say “porch.” Porch. My mother had a porch, resting on telephone-pole piers, on which she lived.

“Let’s go,” she says, stubbing her cigarette and downing her rum. Robbie, we both know, will show up soon in his rusted-out plumber’s van, shuffle up the steps with a six-pack of beer. There is nothing wrong with Robbie. Absolutely nothing wrong with or extraordinary about Robbie.

We head toward the creek—Silver—its banks lined with rocks and moss and roots and tangled ferns. We’ve dammed a spot with logs and sticks and concrete blocks so that there’s a three-foot-deep pool of clear running water, a patch of sandy bottom. Not much, but enough on nights like this. We strip. Wade in. Feel the cool climb our shins. The aunt in West Texas lives in a trailer at the edge of town with a view of the Big Bend Mountains, a dog named Peco, and a truck named Rose. What the fuck, I want to say to the blood-dipped moon.

My mother goes first. Butt, chest, shoulders, then flips onto her belly and dips her whole head under. I go next. Underwater you can see the glisten of stones, the toss of ferns (ostrich, lady, wood). My mother’s white, magnified body resembles a whale, beached in far-too-shallow water. My own? Downed birch trees? Coiled wire? A deer?

The water is ice-cold, mountain melt from higher ground and deeper springs. I raise my face and look up at the dark sky, peppered with holes.

“Goddamn fucking lovely!” my mother shouts, grinning, stepping out of the water. She rubs herself down with her Grateful Dead T-shirt, slips into her underwear, heads toward the light. “Robbie’ll be here soon. You coming, Angel?”

“Nah,” I say. “I’ll stay.” I’m freezing underwater, my body a cube, but diaphanous with stillness. My mother disappears up the footpath, and I dip my face back under, head tipped back like a dolphin, like a bracken fern, like an old wheel, spinning.

I stand up in that shallow lit by moonlight and stay there for a moment—naked amidst the eyeless trees—then step out of the water, dry off, and slip into my clothes.

There are voices on the porch. Candlelight, Robbie’s van, smoke rising. I’m freezing out in the field, but I’m made of bronze, too. Cast iron in T-shirt and jeans, barefoot and far from pregnant amidst the grasshoppers and trees lit by moon.

What is is about fields? The way they make all directions viable. The way they give houses, porches, voices perspective. The way the word itself—field—makes you feel both domesticated and wild, both wolf and human, capable of heading toward that porch with its smoke and laughter, or toward the woods, where you could quietly and, without a sound, start walking.

From Hunger Mountain Issue 20: Edges, which you can purchase here for $8, or consider a two-year subscription for $18. 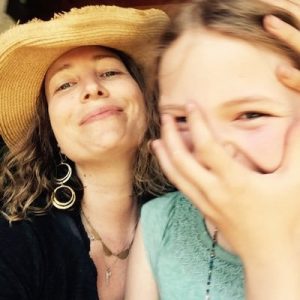 Robin MacArthur lives on the hillside farm where she was born in southern Vermont. Her debut collection of short stories, HALF WILD (Harper Collins) won the 2017 PEN New England award for fiction, and was a finalist for both the New England Book Award and the Vermont Book Award.

Her novel, HEART SPRING MOUNTAIN (Harper Collins) was a IndieNext Selection and a finalist for the New England Book Award.

Robin is also the editor of CONTEMPORARY VERMONT FICTION: AN ANTHOLOGY, one-half of the indie folk duo Red Heart the Ticker, and the recipient of two Creation Grants from the Vermont Arts Council and the National Endowment for the Arts.

by Lindsay...
Scroll to top