Blog - Latest News
You are here: Home / Poetry / Past Lives

Well I was definitely a cat, in one of them,
and I think I might have also been the captive
of a pirate or a robber, someone swashbuckling,
once or twice, because that’s the only recurring
dream I’ve ever had, and I would like to think
I was a Buddhist monk at some point because
that would make me feel better about not devoting
this lifetime to a monastery or an ashram,
and I hope I was an astronaut last time around
or else maybe the Nazca who figured out how
to fly—that’s the only explanation I can think of
for those geoglyphs in Peru, the sand-drawings
that can’t be seen unless you’re floating high above—
or maybe they really were created by extraterrestrials,
in which case, why couldn’t I have been
one of those? I don’t remember any rule
about reincarnations being limited to Earthlings,
but maybe that’s just because the ancients
thought it kind of went without saying.
Which is exactly what I don’t want to do,
what I fear the most: to go, to be totally
and completely gone, without saying. 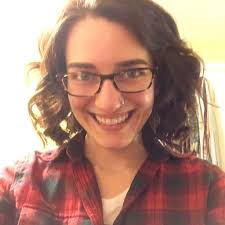 Lisa Rosinsky was selected as the 2016-2017 Associates of the Boston Public Library Writer-in-Residence. Kirkus called her debut young adult novel, INEVITABLE AND ONLY, “an excellent read.” It was a School Library Journal “New and Forthcoming Title to Know About” and one of Barnes & Noble Teen’s top 12 “Most Anticipated Indie Titles of 2017.”

Lisa Rosinsky
How to Write a Book Review: A Meta-review of TransAtlantic