I caught a dove darkening the dawn
with her brooding,
grieving the loss of the cold ark.
I let her fly near the light
of the bright green lime tree,
the steaming red hibiscus.
Esther Phillips, “Bird Catcher”

The sun falls out of heaven like a stone,
a network of bridges sprouts over the rivers—
so many tunnels deep into the hills
like bridges connecting these islands of houses
teetering on the side of the undulating hills.
A dark stain in the sky smells of iron,
you can see the gleam of steel packed
on the barges nosing towards the Ohio.

In the boarding house a man, a round,
plump, little black man, dances
with quiet dignity while holding
the soft tremor of a pigeon in his hands.
He blows a spray of whiskey
in its curious eye. Soon it is drunk
with revelations, the bones slipping.

The conjure man has learned
the vocabulary of leaves and roots,
the dialog of blood. He breaks
the neck with common mercy,
spills the blood in an enamel cup
with its brown cracks and chipped
lip; he makes a circle in the earth,
scoops up dirt, lays the pigeon
out, wing to wing as if in flight.

From here you can’t hear the drum
pounding in the air, can’t see
the flame of light on his skin,
can’t understand the crowd of words
spilling rapidly from his mouth,
but you imagine that his black knife,
with its silver edge, has split
open so many breasts to find the green,
pink, and red entanglement of visions.

If you look closely into the slippery
viscera, you will see a thin mist
rising like mysteries he must read.
Then he covers the inert corpse
with dirt and as if to fulfill
the promise of resurrection, he pours
the blood over the upturned earth,
and raises his eyes from the earth
over the stand of pine trees,
across the mountains, then east over
the Monogahela, going home,
going home. The fat, squat man
stands, spreads his arms and
in this instance you know
he too can fly, that he can lift
himself, dusty coat and hat
and rise upwards, soaring, soaring.

A man studies the trail of smoke in the sky—
in this swelling city a cluster of mountain
settlements—he has learned how to sniff the air
in search of the things he has lost. Deep
in the underbelly of the nation, the swamp
air is thick, carries scents sluggishly, and after
a while, after pushing your nose into the wind,
you learn how to separate a chicken stew
dinner from the gummy sweetness of bubbling
grits, or the green mugginess of steamed greens.
You know your own stink, can tell when
rain is coming and how soon. You grow
alert like a hound dog slinking against a peeling
fence. This is what is lost when you travel,
every place smells different, and the grass
and trees speak a different language. Further
north, the air is clean of all remembering,
and the man carries in his sack the worn,
brown frock of his woman, the one
he imagines still smells of her, the one
he has bundled as his pillow night
after night until their sweat has mingled,
and now they are one thick scent. At night
he gathers it to his face and smells her
to remember her, as weeks turn to months,
and months to a year, and if he were honest
he would say, she is fading, and all he smells
is the funk of his desire and bitterness
on those miles of miles of sky they have walked
looking for her. He waits until morning,
lifts his face, prays for a right wind
to blow her onion and thyme scent to him. 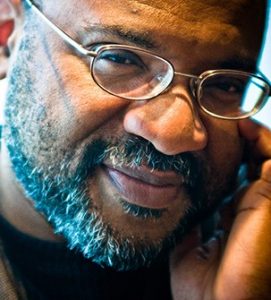 Kwame Dawes is the author of twenty books of poetry and numerous other books of fiction, criticism, and essays. In 2016 his book, SPEAK FROM HERE TO THERE, a co-written collection of verse with Australian poet John Kinsella appeared. His most recent collection is CITY OF BONES: A TESTAMENT from Northwestern University Press. He is Glenna Luschei Editor of Prairie Schooner and teaches at the University of Nebraska and the Pacific MFA Program. He is Director of the African Poetry Book Fund and Artistic Director of the Calabash International Literary Festival.

Kwame Dawes
One of God’s Ovids

The Songs We Know Not to Talk Over