Nimble and knobby, high-stepping it
is how flamingos do it,
courting adagio under the kliegs,
pretending dark.

Their smile Flora confirmed for herself
after climbing into the pen
before she was pulled from
it (giddy,
gleeful) at the zoo,
conservatory
for the taxidermist.

Everything is inclined that way—to mating.
Flora had read this in a pretty hard book,
averting her eyes from the transparent overlays,
the salacious glassine interleaves,
the anatomically correct dissections.

Birchaven took her in, that entranced
gaze still on her face. Now Flora’s pasting decals,
writing maxims for flamingos and lilies,
the motif of chic shower
doors,
and fake lawns where bevvies
of plastic flamingoes on spikes
give a semblance of wit
to cheap bungalows.

Now, Flora’s framing adages
to be less alone, the crux of being alive. I will so live
as to deserve them. You
who read this may have other fans to flame,
ghosts to exorcise, rationales, amulets, scalpels, placebos,
plans to change the inexorable décor of the planet, to increase
tea leaves clumping indecipherable
as so much does—
except bird song, and the pumice-like
crests of waves infolded,
insistent in their breakage,
the shrill of the peacock (a scream),
the amiable flight of the cockatiel
on its way to the mailbox
at the heel of Flora’s friend,
and something shivering, orphaned,
with feathers, high-stepping.

So much to be said for the tenants
with binoculars. Flora writes from Birchaven
where birch don’t flourish, she has no one
to dance with now but the hares
ears flagged,
their small inquisitive ovoid heads,
whiskers a form of antennae.

Salud to all who stand on one foot grinning kind of goofy
two-somes listing (sic) to Bésame Mucho
world going on cha cha hoopdie-ha, high-stepping it
ankle after ankle, cadenced, klieg-lit,
absorbed into the arabesque of pitch
a vortex of effervescence
pricked by parasols tipsy
wafting by in that climate
Flora despises, full of
condescension, know-nothings. But,
O, those flamingos, one knee uplifted
seeking their kind,
the populace dervish,
dancing kite-blinded or barbaric. 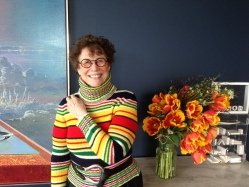 Sandra Stone is an Oregon-based visual and conceptual artist as well as a poet, playwright and author of literary fiction and nonfiction.