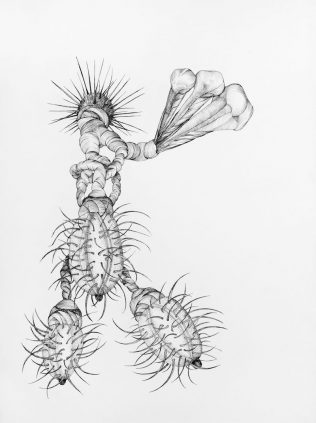 The Crazy Lady groaned up against the bad side of I-35. It wasn’t much from the outside—a squatty, stucco lump of a strip club, perched perilously close to the interstate edge, its façade ground smooth by relentless traffic grit. This was where Austin girls went when they’d been fired from the clubs with valet parking and three-drink minimums, or when they weren’t pretty enough to get hired there in the first place. The Crazy Lady marked the official end of the line in the titty-bar world, full of dancers who flinched at things that weren’t there and muttered manifestos into their handbags.

Her home club was Sugars: the crown jewel of the local smut scene. But every so often, she liked to work at the Lady instead. That afternoon, over chips and queso at Magnolia, she’d talked her two best stripper friends, Christie and Natasha, into meeting her there and making a night of it.

We can look like day-old shit at The Crazy Lady, and still suck up every dollar in the room, she said. We can get completely fucked up and no one will yell at us.

Both were true. Officially, working at The Crazy Lady was about letting herself coast. It was about taking a break from the brutal competition of the top-tier girls, and the tedious rules of the top-tier clubs—gentlemen’s clubs they called them, though only ex-cons used words like gentlemen. At The Crazy Lady, no one cared if she showed up for a shift on time. No one insisted she wear a sparkly cocktail dress, or coat her tattoos with the thick, smelly foundation made for burn victims. She loathed the body makeup. It darkened over the course of the night, giving her tattoos the look of bruises, which she guessed Texas gentlemen preferred.

Unofficially, The Crazy Lady called to her for reasons harder to name. There was something raw and menacing about the Lady that made every one of her nerve endings hum. The place felt cinematic and unreal, as if every tawdry detail were part of an elaborate show staged just for her. As if it were a curated stop on some kind of depraved safari.

Stepping in, she felt a familiar rush, her pulse a hot growl in her ear. The heavy hydraulic door pressed closed behind her, squeezing out all that bleached Texas sky. She waited in the icy blackness, willing her eyes to adapt. The sticky, sweet powder of fake smoke snaked into every hollow. Then, as her vision simmered on, the whole room seemed to breathe with her. Movement everywhere, a synchronized shimmy. Look where she wound up, she thought, narrating her own docudrama.

The club was darker than the others. Darker than anywhere. She felt certain that pitiful, furtive sex was being transacted in the blackened corners. So what? She was good at minding her own business. She’d steer clear of the perimeter. She’d be vigilant about keeping her bare ass from the upholstered furniture.

Vaguely, somewhere in the back of her brain, she knew she preferred to be surrounded by people more fucked up than she—people her junior high therapist would have termed “lower companions.” But trying to arrange that was like chasing the dragon.

Not so long ago, Sugars had done the trick. As a newbie stripper, she’d seen the posh club as a trapdoor into an underworld. And for a while, it had fed the fable: that she was some kind of waylaid heroine, just rolling through. That while her coworkers might be lifers, she was touching down from somewhere else. Somewhere higher. That she was not really of this.

She knew better now. Some of the dancers at Sugars were earning master’s degrees or wrapping up law school. She’d watched as one planned a trip to Mexico and then took a trip to Mexico. She’d noticed one coworker squealing out of the parking lot in a jacked-up F-150, with tinted windows and chrome rims; heard another say that of course she had health insurance.

She didn’t give two shits about healthcare, or tricked-out redneck rides, or even higher ed. That they knew how to do these things. The thought made her seasick.

She did not know what to call any of this. Only that it must be outrun.

Natasha and Christie tumbled in, sinuous and glowy from a long, liquid dinner. They were top earners wherever they worked. Both had glorious boob jobs and pouty, girl-next-door faces. Both knew how to keep banter breezy and light, how to tune down to make the men shine smarter, wittier. She did not know why they let her boss them around.

The three settled into the dressing room, the compartments of their yawning makeup kits accordioning out and out and out. Christie fluttered pale pink glitter nails at a hunched over cocktail waitress, who was somberly reloading her breasts into a push-up. Hon, Christie trilled, we’ll take six Cuba Libres to start.

Later, when her lashes could not structurally bear the weight of another mascara swipe, she knew it was time to hit the floor. She tried to gauge her own level of drunkenness by squinting into the mirror. Standing up would be the moment of truth and she hoped the scale hadn’t tipped too far. She hated barfing or being too smashed to dance. But just shy of that? Heaven. If only she could keep her motor skills and lose everything else. There was something about her face that looked different. But what? A hardness around the eyes. Rum probably.

As a final stall, she tried on a pair of Natasha’s colored contacts. They were lavender or they were turquoise. They were not human-looking (that part she remembers). They had little clear spaces where her pupils were supposed to go, but she couldn’t seem to make them line up. Maybe her pupils were bigger than average. Even under the glare of the vanity bulbs, she could barely make out the sparkly blob that was Natasha.

She stood, shakily, and stumbled around laughing.

Out on the club floor, she dragged each platformed foot along the industrial carpet an inch at a time, feeling her way along. Silhouettes appeared and receded in time with the bargain basement light show. Purple, then dark. Green, then dark. Then, a throb of dingy white. She smelled rivers of spilled Long Island Iced Teas. She smelled vomit and Tiparillos and Ivory soap and Old Spice.

Her fingers raked the worn-down arm of a club chair, and she blinked hard against the viscous dark. By the time she could pick out his fuzzy outline, she was inches from the man. He leaned back in the chair, legs splayed, a bouquet of bills choked in his fist, his face an anonymous smudge. It felt as though a thick veil hung between her and everyone else. 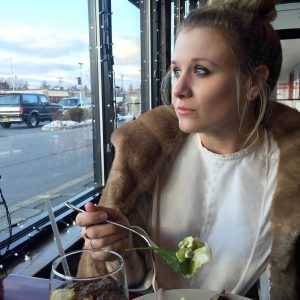 Hallie Goodman’s writing has appeared in many publications including Glamour Magazine, Condé Nast Traveler, and Redbook Magazine. She has received fellowships from MacDowell, NYFA MARK and Instar Lodge, and holds a GED and MFA. Hallie lives in Hudson, New York, where she co-founded Volume Reading and Music Series. She is at work on a memoir.