The songs of birds are call and response.

Kindness is dropping a leaf onto an earthworm’s back to shield it from sunlight.

Quiet is as loud as a bird’s call.

Adrienne Rich was haunted by a line in an Elizabeth Bishop poem: “Love should be put into action!”

Tonight is the 50th anniversary of the film, To Kill a Mockingbird.

A friend tweets of murders in Tulsa from a funeral. This will likely send me down a rabbit hole. The blindspot? I think Tulsa has a history around race riots. I know I read this somewhere, years ago. I’ve been re-reading Adrienne Rich’s essays because of a conversation I had with Jon two weeks ago. We think things are getting really real now. Rich asks: “Love might be put into action by firing a gun, yes—but at whom? In what extremity?”

The path in the woods is desolate. I am walking it alone, in daylight. In Brooklyn. My love of nature pushes me forward. I live on the south end of Prospect Park, where there is a lake. A sizable lake. I walk deeper along the trail, away from the birdwatching couple (their banter is vapid and uncute). I try to find the woodpecker in the trees. I can hear him. The two birds are talking. I don’t know what they want me to know. I hold my phone so that I can upload a photo so that someone will know where to find me should I become lost.

“There’s a lot of ugly things in this world, son. I wish I can keep it all away from you,” Atticus says to Jem.

Later, I watch a baby black girl’s lesson about love come from the hands of an angry father. He pops her potbelly three times. He doesn’t use words to tell her that her jerking from his grip as they crossed Ocean Avenue scared him to death.

The essay I reread today is entitled “The Hermit’s Scream.” It’s a line from Elizabeth Bishop’s poem. True to form, I emerge from the rabbit hole to uncover a fact: 90 years ago this season, the worst race riot in American history was in Tulsa.

Beyond the nightmare, there is still dream.

‘I write to make my own sound,’ the author told me when I asked, why write this story now? The story is hers; her voice is a birdsong. We had this conversation two years ago.

But this dude making figure 8s around his chest right now on the C train, though … Does anyone else see this?

He’s wearing nylon, so the compulsion is loud. Like corduroyed legs in motion in an empty hallway. I can hear him through the subway breaks, mumble mouthing some prayer to his god. He beats his chest. Squeezes his eyes. What penance do you seek, Sir? That cannot wait for you to do this work from the comfort of your own home? His twisted face of agony. What menace do you pray abated? Your most fervent prayer rumbles and rattles like this train.

You’re not hearing me. Perhaps I’m coming at this all wrong. The child’s name is Finch. A type of bird. Catherine once gave us an exercise, pay attention to the conference of birds. Where I lived before, sparrows would roost outside my window. When I encountered dead sparrows in the Spring of 2002, I’d bury them. Could that be love in action? I see everything out the corner of my right eye. I’m mindful of small things. An example: Bees seeking pollen on my walk to the train on my old block crushed by thoughtless pedestrians. They didn’t see them. They just wanted to get the pollen from the tree blossoms. You didn’t know I see all these things, did you? I can’t help myself.

There’s more: I don’t think I understood fully Rich’s haunting from the Bishop poem. The dreaming mind got it though. The poem begins: “Alone on the railroad track / I walked with pounding heart.” I walk through the park today, along the shoulder of the lake, to a deso-late part. Men are fishing and as I come upon them, they look startled. I clench my phone, they don’t speak English. I am alone in the questionable parts of Prospect Park. I am a black woman. I am alone. No one really comes looking for me.

The hermit shot off his shot-gun
and the tree by his cabin shook.
Over the pond went a ripple
The pet hen went chook-chook.

“Love should be put into action!”

Those are the words of the poem’s hermit. “Across the pond an echo / tried and tried to confirm it,” sticks at the tip of my nose. My body knows what this poem means, but my head has a harder time wrapping her arms around it. The dreaming mind? She knows, she goes for a walk in the woods, follows a path, listens for the echo.

Rich’s essay goes further though. She talks about June Jordan’s and Audre Lorde’s visceral responses to unjustifiable deaths of black boys. These poems predate our current conversation about Trayvon. I don’t have the words to write about any of that yet. I have a nephew who also wears hoodies.

“The difference between poetry and rhetoric
is being ready to kill
yourself
instead of your children.”

I’d probably categorize myself as a loner. The hermit enters the woods, seeks enlightenment, draws within, listens to the conference of birds. Love is action. What action shall we manifest? The echo, the call, the response. 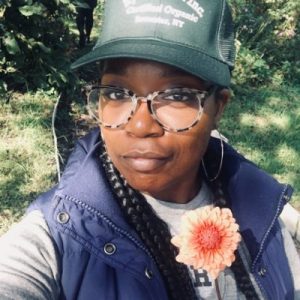 Syreeta McFadden is a writer and professor of English at the Borough Manhattan Community College, City College of New York. Her work has been featured in the New York Times Magazine, The Nation, BuzzFeed News, NPR, Brooklyn Magazine, Storyscape Journal, and The Guardian. She is currently working on a collection of essays.

Review: Everyone Wants To Be Ambassador To France by Bryan Hurt