La  Negra  is  a  beastgirl.   From  forehead  to  heel
callused. Risen on an island made of shit bricks: an
empire.  The  doctor   pulled   La   Negra   from  her
mother’s throat:  a swallowed sword:  rosary beads.
La Negra’s  father  is a  dulled  sugarcane  machete.
Crowned in her sun-dried  umbilical cord,  La Negra
claws and wails, craves only mamajuana.

This is where she will end:
enveloped   in   candlewax.   Scratched   &   caught
beneath your nails. 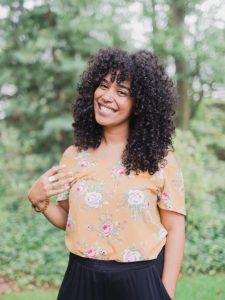 Elizabeth Acevedo is a New York Times best selling author. She is the winner of the 2018 National Book Award for Young People’s Literature, The Printz Award for Excellence in Young Adult Fiction, the Boston Globe-Hornbook Award Prize for Best Children’s Fiction, and the Pura Belpré Award for a work that best affirms the Latinx cultural experience.

She holds a BA in Performing Arts from The George Washington University and an MFA in Creative Writing from the University of Maryland. Acevedo has been a fellow of Cave Canem, Cantomundo, and a participant in the Callaloo Writer’s Workshops. She is a National Poetry Slam Champion, and resides in Washington, DC with her love.