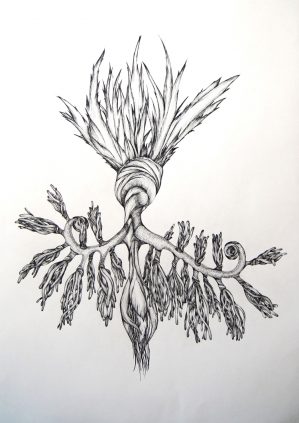 Weird Trans Kid’s bladder is the size of a squirrel—
not a squirrel’s bladder, but an actual squirrel, a chubby gray one.
Weird Trans Kid doesn’t know which restroom to use. Is tired
of all mainstream trans politics revolving around restrooms. Thinks
restrooms are improperly named. Wants to rename them anxietyrooms. Wants
to rename them imnotsurehowtheseplacesareapatriarchalconstructionbutimsuretheyare.
Doesn’t know whether to wrap the towel around his waist or his tits too. Gets turned on
by cold showers and full moons and long car rides. Probably
has a small dick. Or a really large clitoris. Or no genitals at all. Who knows?
Probably looks like a Barbie doll down there.
In any case, they probably don’t get laid very often. Fetishized plenty,
though. Weird Trans Kid has plenty of kinks herself, likes to call
her girlfriend Ma’am and Mama. Probably because Weird Trans Kid never got to be
a little girl for real. For real, though, Weird Trans Kid really is pretty weird, even
without the Trans part. I guess we should talk
about the Kid part too—Kid’s not really a kid anymore.
Kid’s twenty-five. Kid just doesn’t know
how to colloquially describe an adult in gender-neutral terms. Kid grew up
calling all their friends’ parents Mr. [First Name], Ms. [First Name]. Would it surprise you
to learn that Kid played baseball for fifteen seasons, made it
to the all-stars, danced the cha cha slide? Had two parents, two siblings, two dogs? The dogs
are the selling point here. That’s what you’re supposed to relate to.
People LOVE dogs. Unless they’re cat people. Nobody seems to love both cats and dogs,
at least not equally. I’m stuck in traffic in Kentucky, or maybe Ohio.
There’s a car in front of me with a bumper sticker
that reads PROMOTE DIVERSITY and it has little illustrations of different
dog breeds. If I were a dog, everyone would love me. Or perhaps a goat. 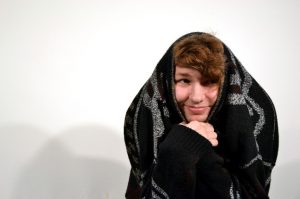 Tyler Friend is a non-binary poet & designer from Tennessee. Their chapbook AMPERSONATE is available from Choose the Sword Press, and they received an MFA from Vermont College of Fine Arts. Tyler is the editor of Francis House and the designer for Eulalia Books.