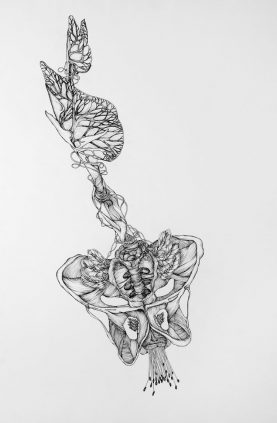 The vine’s voraciousness dwarfs even the kudzu of the Southern United States, whose growth of one foot per day is a snail’s pace compared to the Teczotchicin’s rate of up to twenty-five meters. It’s one of the rare plants one can watch growing beneath one’s feet, birthing folktales of murderous qualities. Indeed, the vines have been known to devour whatever they encounter, entangling wild boars in their constriction, swallowing homes of nesting birds, and suffocating local banyan trees which reach thirty meters into the air.

In 1894, explorer Santos Beniz saw the wild vine from his ship and believed the tips of the undulating plants were people waving. Upon sailing to shore, however, Beniz watched as creepers slithered into his crew’s dinghies, seizing oars and wrapping around the legs of crewmembers. Beniz planted a pole through the abdomen of one of the vines and claimed the land in his name, watching as the speared sucker reached its tendrils skyward to consume the flag. Here, he promised—removing his machete and hacking his way inland—a paradise on earth would be built, and he sent back for crew after crew of men who would build a city named after him.

Incredibly, the city of Santos Beniz still exists with beach access, scuba lessons, and a sandy downtown plaza inhabited by chocolatiers, rum distilleries, and tiendas selling conch shells and shark’s teeth. But while the water surrounding its shores is turquoise and the sea is filled with parrotfish, nudibranchs, and glowing pink anemones, it’s hard to relax when gazing through the snorkel’s goggles. At all hours, one hears the swinging of machete blades and the grunts of workers battling the jungle foliage. The city must employ a maintenance crew of over three hundred to keep the vine at bay; they pull roots from the ground and set brush fires, while the vine’s tendrils snake between their legs, reaching for the city’s visitors and children.

Every hotel owner in Santos Beniz has the same nightmare: the doors of their main entrance widening, vines tumbling toward the front desk. Every restauranteur has the same fear: liana breaking through kitchen tiles to seize butcher knives in their leafy grip. Tourists who visit the beaches of Santos Beniz close their eyes, attempt to enjoy the sunshine, but can never truly rest. Though it’s only the breeze tickling their legs, they leap from beach chairs, expecting at any moment to see the tips of vines slithering between the plastic straps, the maintenance crews dangling from the cliffs.

The Monster Snake of Typhon

In adulthood, the Monster Snake of Typhon reaches over five meters in diameter and one hundred and fifty meters in length, its magnitude surpassing that of a London underground train. Its native habitat is the rainforests, where its prey consists of water buffalo and rhinoceri. However, since the encroachment of local cities, the Monster Snake has been found in Typhon’s financial district as well as populated tourist centers, overturning trucks, smashing store windows, and swallowing entire tour buses, digesting them slowly as it escapes down subway tunnels. To see video clips of its attacks is like watching Japanese kaiju films, where scaly-backed giants terrify cities. One watches the shimmering blue, diamond-backed pattern as the snake overturns a hot dog cart and opens its mouth to swallow an SUV.

Two decades of research by Typhon’s Academy for Reptile Studies has helped quell the city’s panic over the creature. Dr. Lefraig’s paper, “The Monster Snake and Characteristics of its Prey: Zero Evidence for Across-Population Targeting,” revealed that the reptile does not choose prey randomly:

“To assess foraging habits, we utilized pheromones of men, women, and children, analyzing variations in composition, breadth, and niche overlap regarding prey’s age, social status, and profession. Six male Monster Snakes were sequentially presented with the scents of over two thousand subjects to determine which scents stimulated gland secretions and predatory prehensile movements. Chemosensory tests indicated that the Monster Snake chose prey consistently, targeting specific members of the test group. Variables for its preferred diet included the prey’s 1) distance and association with offices of international banking firms or world trade organizations; 2) political involvement with energy lobbyists and/or a history of climate-change denial; 3) identification as a corporate lawyer.”

Subsequent research examined death records and revealed confirmation of the study: every one of the victims served as pharmaceutical CEOs, insurance-claim deniers, and/or bank directors. The tour bus of victims? All lawyers.

Most of Typhon’s populace has since come to admire the Monster Snake. Like the common garden snake, who may look frightful but can rid basements of rats, the Monster Snake has purged the city of the least savory part of its population. In recent years, there’s been an exodus of bureaucrats and investment bankers to countries far from Typhon’s jungles. As for the rest of the world, there is great interest in the creature, particularly among American zoologists who have petitioned to bring the snake to the United States for study. To date, the US has vetoed any such actions.

“Large as their terrestrial brothers and sisters, the seahorses sport aqueous manes which flow like seaweed from their crown, and like their diminutive counterparts, their tails curl beneath them in a question mark. Fitting, given all the questions we have. Where have they come from, their trumpet-like snouts emerging from white waves during their watery stampedes? To what God do they pay tribute, circling our shoreline like dancers in the dusk? Look how the sea is filled with the creatures, so plentiful that while I sip chardonnay, I watch herds passing along the coast. How I wish to call to them, to watch them emerge from the sea, to come riding to this table where I drink, but they have no hoofs, so must race seaward, their backs glistening in the setting light.”

Though some consider Chante’s essay a fairytale, there are photographs aplenty. One need merely look at the faded black and whites of the sea gauchos who tamed and rode the creatures. Umberto Cézanne, one of Argentina’s last living sea gauchos, passed away in 1964, but he traveled widely giving lectures about the old days of ocean-wrangling, when men in town would head out with harpoons and fishing nets to haul in the day’s catch. Cézanne often appeared intoxicated during his talks at oceanographic institutes, starting fist fights with marine biologists. Such behavior was consistent with the machismo of the gaucho life. Heavy drinkers, fighters, and letches, they spent their days wrangling fish from the backs of seahorses, which they treated brutally, and gave rise to the proliferation of whisky bars along the coastlines. A growing number of single mothers were left to raise their children.

Perhaps it was the gauchos’ behavior which led to the seahorses’ sudden and mysterious departure. One evening, as sunset spread along the coastline, the sea gauchos lay on the backs of seahorses, drinking and cursing. Suddenly, as though responding to a call, the horses lifted their snouts toward the horizon and took off, dragging the men with them. From the shoreline, witnesses could see the men hanging on as hundreds of seahorses thrashed the water white, their gallop a polyrhythmic splashing of sea foam, leaving no trace of their existence except for the small waves which lapped against the pebbled beach.

If Phillipe Chante questioned their appearance, today scholars question their disappearance. Where did the great seahorses go? And why did they kidnap the men who, like the horses, were never to be seen again? Despite these mysteries, the coastal towns grew more peaceful after the men were gone, and children and women flourished as keepers of their villages. As for the seahorses, their images adorn the tile mosaics and paintings in restaurants along the coast. Sitting at a cantina today, one can almost hear the wet spray of the vanished herds, their neighs echoing across the water.

From Hunger Mountain Issue 22: Everyday Chimeras, which you can purchase here. 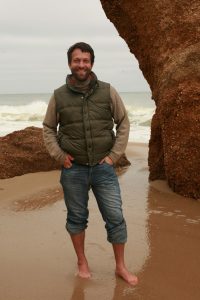 Alexander Weinstein is the director of The Martha’s Vineyard Institute of Creative Writing and the author of the short story collection CHILDREN OF THE NEW WORLD (Picador 2016). His fiction and interviews have appeared in Rolling Stone, The Atlantic, World Literature Today, Best American Science Fiction & Fantasy 2017, and Best American Experimental Writing 2017.